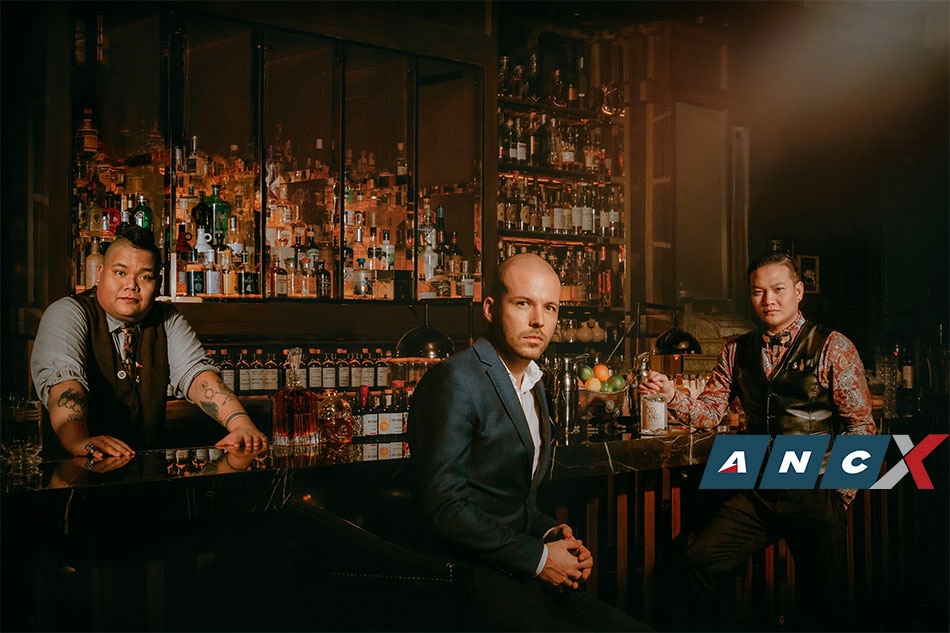 While the quarantine is ongoing, the beverage manager of Shangri-La at the Fort spends most of his days inside the hotel’s bar laboratory, hatching drinks that are conversation-starters. But when this is all over, he just wants to drink a bottle of champagne with friends. By BAM ABELLON
ANCX | Jul 03 2020
facebook twitter

Alexandre Renoue is immensely particular about certain tastes. It’s a gift that has served him well in his career as an award-winning bartender, and now as the beverage manager of Shangri-La Hotels and Resorts Manila.

He does not like onions and garlic. He hates cheese. And don’t tell him that it’s rare for a French guy to dislike one of the world’s most popular dairy products. He is not French; he is Corsican. Corsica, where he was born, is a small island in the Mediterranean Sea, and is politically an administrative region of France.

He loves rap music, and if he could concoct a drink for anyone in the world—dead or alive—he would make one for the late musician Tupac Shakur.

Growing up mostly by himself, Alex moved to Paris, France in his teens, a time when he considered Tupac’s music his “best friend.”

“He was an idealist revolutionary with a hard childhood, his lyrics really touched me when I was young and alone,” he tells ANCX in a video interview. “I’d love to talk to him and ask him what he thinks of the world now.” His cocktails are, in fact, named after rap albums.

But the solitary life, he says, was akin to a permission that fate gave him to explore the world. He was held by no bounds and knits, and was always fueled by his curiosity and his propensity to easily feel bored.

“Since I found this profession, though, I have never felt bored,” he admits.

This afternoon, as we reached the 100th day since the extended community quarantine (ECQ), we talk to the man in black shirt, a garb that exposes his tattoos, which cover most parts of his arms—more on that later. His words flow out ever so casually, always straightforward and without bull, but genial.

It’s easy to imagine him playing his movie counterparts in real life, always ready to listen to the truths that come out during moments of inebriation. And rightfully so. As a self-confessed introvert, he’d rather focus on mixing, and let the people at the bar do the talking.

Now, he’s on the other end of the conversation.

How does one become a bartender?

You don’t plan it. I actually studied chemistry, biology, then tourism, then geopolitics. I get bored easily. After graduating, I couldn’t find a job. One day, somebody told me that they were looking for someone to work at a bar. I needed the money, so I took the job. I was a barback [a bartender’s assistant or runner] during the night, and in the morning, I was waiter for a beach restaurant. I always observed bartenders, what they did, and how people interacted with them. There’s a lot of creativity, mixing of colors, and everything. Soon, I started researching on the Internet, and I read a lot of books—I still do.

After a while, I started bringing in new ideas. I became a head bartender, then an assistant manager. Then, I opened my own bar in Reunion Island, a small island in the Indian Ocean [a region of the French Republic].

You really worked your way up. But it seems that you also just go with the flow.

I just like learning new things. And with my studies, I had to travel a lot during my training course. I exposed myself to new things all the time. I met a lot of people. One day, somebody from Corsica, a world-famous bartender named Jimmy Barrat called me, and offered me to join him in Zuma Dubai.

That’s where I learned everything. I learned how to deal with a high-volume bar, with perfectionism, and with working long, long hours.

You travel the world a lot. Do you ever see yourself staying put?

I can stay here, in the Philippines.

Yes, definitely. After Dubai, I went back to my island. Then, someone whom I met in Dubai called me and said there was an opening at the Shangri-La. They invited me to design the menu, do the pre-opening, and open the lounge. It was supposed to be for three months. Then, they offered me to stay as beverage manager. So, I stayed.

It’s beautiful here. It has been a great experience, and it’s a really good company. I never worked in a hotel before, but they took me in. As you can see, my style [he shows his tattoos], they’re not really hotel-style.

I could have gone to Toronto or Sydney because I had offers there from the same company, but I chose Manila.

Why did you choose Manila?

First, I love the island life. Second, Filipino people love to enjoy life, to go out. So I knew people would listen to my suggestions, understand my passion. There are some countries where people are close-minded, but here it’s not like that. And when you look at the facilities of Shangri-La at the Fort, we have a lab where we can do anything. Since the crisis, I spend every day, between six to eight hours in our lab.

It’s my second home. I’m thinking of putting my bed there.

This passion of yours, do you think your subjects in chemistry, or biology, or geopolitics have helped you in any way?

Yes. All these subjects allowed me to meet different people, and to travel, which made me understand the different flavors of the world. In my job, meeting people with different minds is very important. You make drinks inspired by the places you’ve been and the people you’ve met. When you have a guest, you don’t just give them a drink. You listen to them, and you give them what you think they want to receive.

Speaking of creating drinks, how does one create drinks?

I read a lot, and I taste a lot of different flavors. I use my nose—and learn the balance of smell and taste. I also base it on feelings. You just have to try everything. It makes you know what you like and don’t like. I hate cheese, and I don’t like onions and garlic, but I try those to open my flavor profile. There is no secret. It’s really just about trying everything and opening your mind and experimenting. If you do the same thing all the time, you’re never going to progress. You need to work on it. Six, seven years ago, I was cleaning bars, now I’m a manager. It was a lot of work.

Well, the recipe will come quite easily. But there are other things. You have to make it right for different people. And then you think about how it’s gonna look like. Around 80% of “flavors” come from what you see. For example, I have tried so many times to create a black drink, and people just don’t want to drink a black drink.

And then you think about the menu, and how it’s gonna look like. Is it easy to understand? If your menu looks nice, and it sounds smart, but only 1% of the population will understand it, there is no point.

On the topic of people, what’s the most unforgettable moment you’ve had with a customer? What secrets have your guests told you?

You don’t want to hear them. But in Dubai, one time, one guy came in and asked me for a really sweet drink, like with lychee. The gentleman was looking really rich, and had two bodyguards with him. We got to talking, and had a comfortable conversation. It suddenly came up that I lived in Libya for a while to do my training course for my studies. He was shocked. I was like, “Okay.” Apparently, the guy was the son of Muammar Gaddafi. He took off his Rolex and gave it to me. I still have it. That’s all I’m gonna say.

There has to be more to that story, but okay, we’ll leave it there. Let’s go back to the here and now. This pandemic has been hard on everyone. How has this changed the way you view your career or your future?

We are lucky that we have different outlets. We have The Bake House, Raging Bull Burgers. We were already planning to create our own brand of bottled cocktails. After two to three weeks of the quarantine, we were already selling them.

Our cocktails are selling so fast, so every day we have to make them. We have modern facilities. Everyone here has been thinking of the future. All my colleagues have been paid, even when they are staying at home. We at the lab continue to push to sell beverage and develop the brand.

What do you miss most about the pre-pandemic days?

We are a small community of bartenders, and there were moments when we would try new products with the suppliers. I’m not a party person. But I like to go to the bar when nobody is out because I just want to meet up with my friends. I don’t dance. I never really get drunk. I’m boring: when I go to bars, I talk to bartenders, and most of the time we just talk about beverage.

Hold on. You don’t get drunk? A lot of people have tried learning how to mix drinks specially during the quarantine, so they could have a semblance of a bar at home. There have been several moments that deserve a shot—or two or three shots—of alcohol.

Understandable. But I don’t really get drunk. I don’t drink at home also. My house is full of alcohol because everybody gives me alcohol. I drink wine when I’m at home, sometimes. I try the flavors, sometimes, but that’s it.

I smell alcohol every day. I’m mixing alcohol all the time. I am always manipulating ethanol, and the last thing I want to do when I get home is drink alcohol.

Okay, then what do you do to decompress?

I used to surf, wakeboard. I like walking. I smoke shisha. I love going to Siargao; it’s my favorite island here. I’m waiting for the flights to be back in business. I love coffee, but espresso. I don’t get cold brew. I like my coffee strong, Italian. I don’t like sugar. I’m also trying to learn more about wines.

Yeah. I used to be a very shy person. And I understood that if you don’t say what you want, that won’t work. So now, even in my relationships before, it’s yes or no. I don’t have anything in the middle.

What’s the first drink you’ll have when this pandemic is over?

A bottle of champagne—with my friends.

Before we go, you mentioned about your style that’s not meant for hotels. You said that while pointing at your tattoos. What are those about?

Oh. I’m just covering my past. I used to be bad boy. Now, I’m happy. I’m the happiest person in the world. I love my job. I have money like I never expected in my life. I’m traveling the world. I’m doing my passion. There is no point in fighting anymore. Now, I feel really peaceful.