In with the old: what drives Alfred Perez’s passion for restoring vintage cars 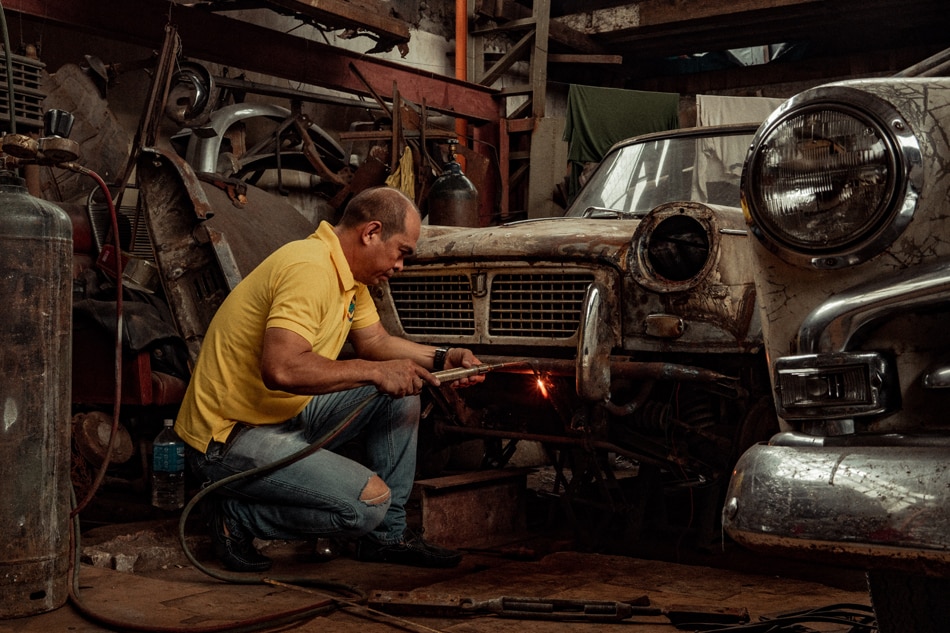 Perez gets down to business in his auto shop in Kamuning. Photograph by Artu Nepomuceno
Drive Cars and Bikes

In with the old: what drives Alfred Perez’s passion for restoring vintage cars

Tucked away in Quezon City is a shop that is at once an anachronism and trendsetter. Here is the man behind the name
Paolo Vergara | Sep 27 2018
facebook twitter

It’s a national holiday and that’s precisely when business is buzzing in this car shop along Kamuning Road in Quezon City, one of many in this thoroughfare. What sets Alfred Motor Works apart, however, is that here, time seems to have stopped at around 1985.

A 1967 Ford Mustang pulls up, its revs stirring the early morning silence. Out steps Alfred Perez, head mechanic and proprietor, with a triumphant look as he exclaims, “Got it running at first click!’ This was day two of testing the Sedan for roadworthiness. With the back of his hand, he wipes the sweat off his forehead and acknowledges his guests. “Palit muna ako ng damit,” he tells us, sheepishly grinning.

After a few minutes, despite the change of shirt, the faint smell of enamel persists. His “office” is a section of the workshop walled off with plywood and some vintage gasoline dispensers, the kind the movies use as props for spaghetti-Westerns. His “desk” is a 1955 Chevrolet pickup truck’s sawed-off hood, with papers and envelopes stacked on it. Glass display cabinets hold toy cars and trophies. The workshop’s walls are covered with hundreds of wheel rims of different models.

He seems divided now, both eager to share his enthusiasm for vintage cars and to attend to clients slowly streaming in. A porter from the Peninsula Manila arrives to collect a restored Sarao jeepney, with its iconic metal horses adorning the hood. Alfred apologizes as a regular interrupts us to inquire about a pickup. “Hold up, pare,” he tells me, then to his customer, “Kamusta! Nasimulan na ‘yung grilles…”

At age 9, Perez learned how to drive. The son of a car mechanic, he would play in his late father’s workshop behind their house, a few meters down the road from Alfred Motor Works. Unbeknownst to him, he was beginning his education on the ins-and-outs of auto works.

“May mga binibigay siya sa akin na piyesa, nililinis ko, natutuwa ako” Perez recalls. “It was a training environment na pala, step by step, piece by piece.” It was never forced on the son, these lessons. It’s just that when the father noticed that his youngest was the one interested in cars, he worked to further develop his interest. Many of Perez’s crew today were also his father’s employees, or children of older employees. Chatting them up, one sees that their work is far from rote. Their faces light up talking about the nitty-gritty of the job, and their dream cars.

The Perezes specialized in old cars, but this is something the son will only notice as the years passed. As the marques around him changed, Perez noticed that his father continued to stock parts that were “getting old.” Pretty soon, the other auto shops around Kamuning began changing their stocks but his father’s continued its course. Many times, the elder Perez’s barkada would arrive, and the shop would close early as father, son, and friends hit the highway to far-flung barrios to look for old vehicles.

Perez reminisces how they worked—or serenaded—to get the cars, many of which were barely more than rusting husks. Some owners charged too high, others were unaware of their vintages’ worth. For the Perezes, cars were more than a lifeblood. Today, Perez and his 50-plus vintage cars make the rounds of auto shows. His shop’s expertise was even tapped to restore the presidential cars of Malacanang.

On average, a full restoration takes a year. Perez starts with the engines and other mechanical aspects before moving into upholstery, veneers, and chassis. To sustain the business, his shop takes in contemporary cars for standard repairs. “It’s fast money, it supports our passion,” he explains.

The ancient Greek historian Plutarch speculated: if you take a ship and replace it with new wood every year, is it still the same ship? It’s a question Perez asks himself with many of his projects. For him, heritage is an important factor in restoration.

He remembers working on a presidential Mercedes-Benz, and while it was easier to replace the entire handle where half was chopped off, he decided to fill in the missing half by melding a reproduction based on old diagrams from the car company. “That handle has history,” he beams, “I couldn’t just scrap and replace it even if the parts could be sourced.” This in spite of Mercedes-Benz starting a vintage repair service in the mid-2000s, reproducing parts for their old models.

Speaking of history, Perez is hungry, and invites us to a late breakfast in one of the older tapsi houses in the area, which apparently serves “wagyu tapsilog” and other premium dishes alongside regular recipes. Our conversation continues there.

Amidst today’s nostalgia for music, fashion, and cars of decades past, Perez takes restoration a step further. During one auto show, he decided not to repaint his cars, much to the bewilderment of participants, leaving the cracks and fades intact on the chasses. The mechanic figured, if old watches are prized for their patina, marks, and all, then the same endearing imperfections could strike chords with car enthusiasts. Soon, forums were popping up on how to preserve automobile patina, and more.

Perez finishes his bangus silog ahead of me. Amidst the smell of fried food, I still pick up whiffs of enamel, but I think it’s coming from me and the photographer, too. After a few more stories, we part ways with vigorous handshakes. As the photographer and I stand on the sidewalk waiting for our rides home, Kamuning and its auto shops are now fully awake, and Alfred Motor Works is one of the cocks crowing loudly: the infernal wail of metal saws, hammers clanging, orders barked over the din. Through it all, I spot Perez among his crew. His shirt is dirty again.
next