It’s already the world’s most popular e-cig brand, but will Pinoys smoke it? 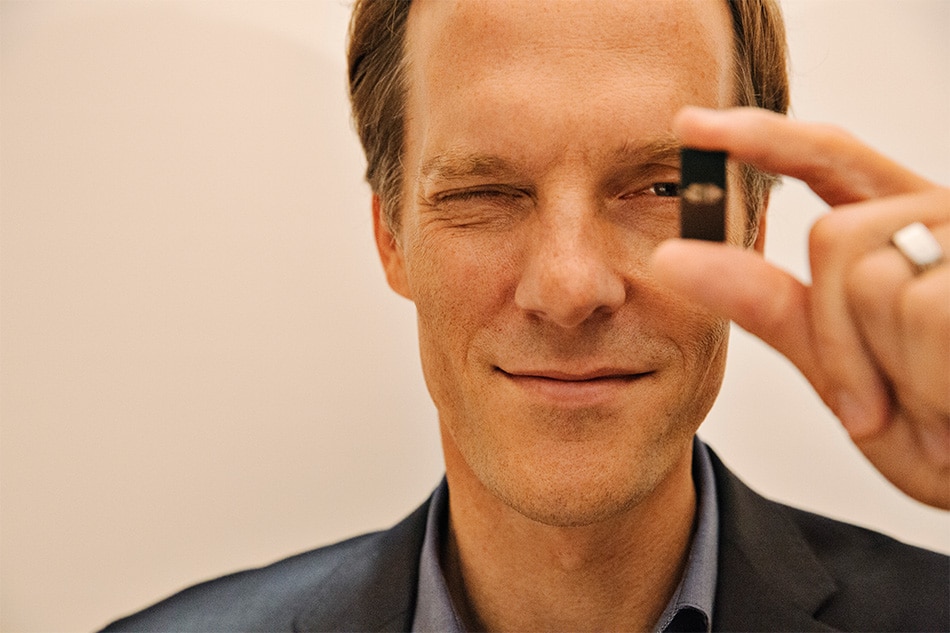 It’s already the world’s most popular e-cig brand, but will Pinoys smoke it?

The founder of Juul is in Manila to sell his option to cigarette smoking, even as he continues to defend its value amidst recent banning of e-cigarette sales in San Francisco, the home base of Juul’s parent company
Bam Abellon | Jun 20 2019
facebook twitter

Adam Bowen and James Monsees, the founders of Juul (pronounced as jewel), the most popular electronic cigarette brand in the world, are facing a conundrum. On Tuesday, June 18, in a report by Forbes.com, the legislators of San Francisco City, U.S.A., the home base of JUUL’s parent company, Juul Labs, have voted to ban all sales of electronic cigarettes—including those from online sellers. If nothing gets in the way, the city is expected to implement the ban in 2020.

It’s not the first time JUUL is facing a backlash for it’s billion-dollar product (in December 2018, tobacco giant Altria invested $12.8 billion for a 35% share in the company). In 2018, the U.S. Food and Drug Administration (FDA) cracked down on vaping devices that are catered toward the youth, and Juul was on top of that list.

In the June 18 report, a representative from Juul told Forbes, “The prohibition of vapor products for all adults in San Francisco will not effectively address underage use and will leave cigarettes on shelves as the only choice for adult smokers, even though they kill 40,000 Californians every year.”

With all these hurdles, the brand is not showing any signs of slowing down. It’s currently expanding in Southeast Asia in the hopes of convincing more people of its value.

Juul in the Philippines

Today, June 20, Juul launched in the Philippines, the second country in Asia where it is making its home. They landed in South Korea last May.

Two days before the launch, Adam Bowen spoke to ANCX at the Shangri-la Fort.

“Our vision is to create a third path for smokers,” Bowen said, reiterating that they are not marketing the product as a cessation tool. “It is a smoking alternative with less toxins than a combustible cigarette. The idea of harm reduction has never been very successfully employed in smoking. We wanted to create a third option, which was to continue consuming nicotine, continue engaging in this ritual, while minimizing harm.”

On the issue of catering to the youth, Bowen insists that their target audience have always been adults. Their product becoming a sort of status icon for minors is an unintended consequence, he said.

He told ANCX, “Marketing to the youth puts in jeopardy our ability to continue selling the product to adult smokers. We’re very much aligned with the FDA and regulators elsewhere in that regard. The steps that we are taking increasingly severe steps in attempts to reduce the appeal and access to the product to the youth.” The steps they’ve taken have included their marketing efforts: design and packaging that are “sober and adult-oriented.” Bowen also mentions they use adults as their models.

In the Philippines, where more than 15 million people are smokers, Bowen promises to implement the same measures to avoid selling their product to minors. “We’d also be putting in key controls to restrict the access of the product to the youth. It’s important to remember that both in the Philippines and the U.S., it’s illegal for minors to purchase the product to begin with. So we’re putting in place our ‘mystery shopper’ program here in your country. We will test retailers to make sure that they are compliant with the verification, and if not, we sanction them. We eventually stop letting them sell the product.”

Juul will also soon provide users the ability to monitor their nicotine consumption through an application (for both iPhone and Android users). They will also add features that will help prevent unauthorized use of the product.

But will these measures work for Juul in the Philippine setting, where smoking is banned in public places, and using e-cigarettes is considered “smoking”?

In a report by the Department of Health, smokers in the Philippines have already began to decrease, from 17 million in 2009 to 15.9 million in 2015—before the smoking ban was implemented. The number is also expected to go lower, according to the Philippine News Agency, because of the tax hike on tobacco products (the proposal is to raise the prices to an average of 60 pesos per pack). A Juul starter pack costs 1,600 pesos.

We have yet to see if the brand that holds 75% of the market share in the world will extend its power in the Philippines.

Who is Adam Bowen?

Born in Ontario, Canada, Adam mostly spent his childhood in Arizona, which he calls home.

He went to the University of Arizona for two years, but found it “too big of a school.” He then went to Pomona College in California, where he studied many disciplines, including philosophy, architecture, arts, languages, and poetry. He even took up a lot of science subjects thinking he would one day go to medical school.

When he was in his junior year, his adviser told him to focus on one subject, “or you’re never going to get out of here.” He looked at all the classes he already took, and did the math: “Based on the number of credits, physics turned out to be the easiest thing to finish, although physics also came naturally to me.”

After getting a degree in physics, he went to Stanford University to take up a master’s degree in product design. “I was really always passionate about invention and product development. I just didn’t know that it was a career, and where to study it,” he told ANCX early this week.

Being in the cigarette business, however, was not something that appeared early in the pipeline—especially because he came from a family of athletes. His older brother was a star baseball player and his younger sister was a star soccer player. He himself took up boxing, racquet ball, and he was trained in taekwondo for many years. His mother, he said, is already in her 70s, and still runs marathons. All of his family members are also long distance runners.

“It’s weird that in this environment, I took up smoking,” Bowen said.

He started smoking when he was around 18. “I don’t attribute it to any kind of peer pressure,” he said of this habit. “I think there was just something about it that I enjoy. I enjoyed the ritual, I enjoyed the sensation.”

His family didn’t know about his smoking until years later, and, naturally, they were “concerned.” When they found out he was thinking of inventing an “option” for smokers, “They really got behind it. I think they had a lot of faith in my understanding of the science.”

In fact, when he and Monsees—his Stanford University classmate, who also has a physics degree—conceived of the product, it was mostly to create a solution for their habit. Their smoking, Bowen said, got heavier with all the late-night work that they had to do for school. But immediately after that personal motive came the realization that there are billions of smokers in the world. “It’s a massive global epidemic that we as a society has gotten too comfortable with.”

Did he ever try quitting? “Yes,” Bowen admitted. He has tried it so many times he had lost count. The longest he had gone without combustible cigarettes was three months. With Juul, he tried going without it for as long as two months. “Look I am obviously aware of the health risks of smoking,” he said. “And believe me when I say that I have a strong will. I am able to commit to something and follow through. But in the case of smoking, I just couldn’t.”

He realized he actually didn’t want to quit smoking. What he wanted was to try to live longer, and Juul was a way to do that. “I just didn’t want to die from smoking.”

Today, he starts hoping Filipino smokers will see Juul in the same light.