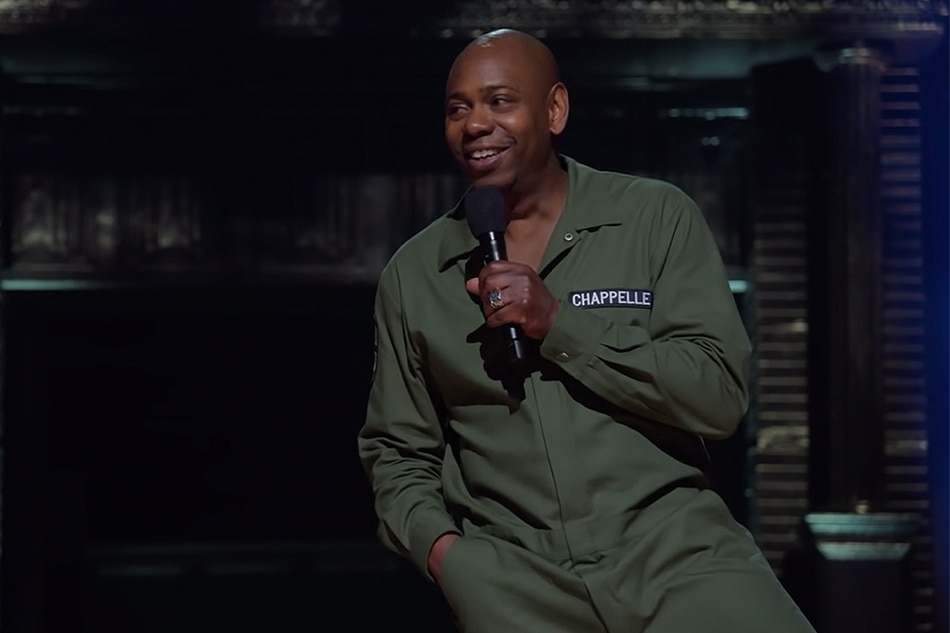 The author says watching Chappelle live is incomparable to watching a Netflix special on the small screen. Photograph from Netflix
Culture Spotlight

Laughing through my tears: A very honest review of Dave Chappelle in Manila

Woke culture and the Me Too movement have clearly made a dent on the revered comic’s jokes. Still, the last time I enjoyed sitting in a chair for three hours this much was when I was on nitrous oxide for my wisdom teeth extraction.
Audrey Carpio | Jan 21 2020
facebook twitter

Fifteen years after Chappelle’s Show became the funniest thing on cable, the character still lodged in my memory is Tyrone Biggums, the twitchy white-lipped crackhead who charmingly cons people into giving him more money for crack. The humor in Chappelle’s skits was provocative, political, and risky in a way that only made sense in the naughts. The show, which lasted all of three seasons until 2005, catapulted the comedian to an extraordinary level of fame; its runaway success was also what abruptly ended it. Chappelle started to feel that perhaps instead of skewering stereotypes, his sketches were starting to reinforce them. He walked away from a lucrative deal with Comedy Central, and receded from the spotlight for several years.

He started doing shows again in 2012, but it was only until he came out with his Netflix specials, starting in 2017, that one could say he has truly, fully returned to the scene. What he came back to, however, is less than complete adulation. The now-woke critics slammed 2019’s Sticks & Stones for being offensive and insensitive, in particular to the transgender community, his favorite group to make fun of. He’s been accused of being unapologetically anti-woke and overly defensive of celebrities who’ve been MeTooed, and now he’s been downgraded to an unfunny Gen X tito who can’t get over his own tired schtick. This hasn’t affected his success at all—he’s still a multimillionaire who sells out shows.

Having seen parts of his Netflix outings, I could see how some of his jokes not only land the wrong way, but are cringingly out-of-touch with what’s considered acceptable behavior today. I also sensed, however, that he really thinks about and wrestles with these issues, and is only voicing out what many regular people are uncomfortable with. As he has said elsewhere, and I paraphrase very loosely, it took more than a hundred years for black people to get where they are now—and they’re still a marginalized group—so he’s quite envious that trans people get to demand instant equality. Still, I didn’t think the specials were exceptionally funny, so I didn’t really know what to expect at Solaire.

The night opened up with his touring DJ, Trauma, dropping ‘90s jams that got everyone on their feet. The first act was Mo Amer, an Arab-American comedian who went off on hummus culinary appropriation; he was followed by Michelle Wolf, who took on cancel culture in a way that was smart, funny, and not anti-feminist. The audience was primed—I also had a few drinks in me—so by the time Chapelle rolled in, we were ready to eat it all up. It was his second night, he was warmed up, and whatever didn’t work the previous evening was reconfigured.

I won’t go through his set (mostly because I can’t remember it exactly) but as he was talking about the Philippines he said he walked around a local market for the first time and thought, “Is it transgender day?”, thereby setting up his next segment. He paused, and asked the audience if he could go on. The audience acquiesced—not that it would have made a difference—and he went on to talk about how the MMA fight between a transwoman and a ciswoman resulted in the latter being pummeled to an inch of her life. He had put his money down on the transwoman.

He brought up Caitlin Jenner, whom a magazine hailed as “Woman of the Year” soon after her coming out. “She beat out every other woman in the world—without ever having a period.” (To me, however, that had more to do with white celebrity privilege than being transgendered.) He says he’s not unsympathetic to their cause and supports their right to live as they wish, he just finds the whole situation of having body dysphoria utterly hilarious. Is Chappelle transphobic, or just transphobic-presenting?

The show was dedicated to his friend Daphne Dorman, a transwoman who was a fan, a friend, and a fellow comic. Daphne was mentioned in Sticks & Stones to have “laughed the hardest” at his jokes. Critics, naturally, said this was the equivalent of racists who say, “But I’ve got friends who are black!” In Manila, Chappelle shared how he had asked her to open for one of his shows. Less than a week later, Daphne killed herself, leaving behind a daughter. “One day I’m going to be able to tell her daughter,” he says, “’your father was a wonderful woman.’” The mofo just couldn’t resist.

Chappelle also walked back something he said in one of the Netflix shows. In the course of explaining why he declined to appear in the documentary Surviving R. Kelly, he asserted that director Dream Hampton misquoted him as saying, “It’s too hot for TV” in order to promote the film. Hampton fact-checked his “joke” on Twitter. At Solaire, he sheepishly admitted that he actually did say those words. Here’s hoping he’ll one day change his mind about Michael Jackson and Bill Cosby, his childhood African-American heroes, whose victims he joked about quite disgustingly. We know it’ll take a minute.

Having said all this—the Chappelle show was truly funny. Watching with a live audience, where he feeds off their energy and responses, is incomparable to watching a Netflix special on the small screen. Incessantly smoking cigarettes, at a certain point he entered a flow state and would sometimes not even finish a joke before segueing into another rollicking tale. I laughed with tears when he told this surreal story about a white boy who was so high on crystal meth that he tried to fight Chappelle and 11 other black guys on weed. Even his spiels about his long-term marriage with his wife Elaine, whom everybody knows by now is a Filipino American, seemed a bit more tender. Oh yeah, he tried to “cheat” on her by rubbing a piece of fish all over his crotch. Elaine, being Asian, didn’t miss a beat, and asked, is that mackerel?

Chappelle typically ends his sets with a punchline that circles back to an earlier joke. Here, he asked the rhetorical question, what if pussies were gay? And followed it to its ludicrous conclusion. The last time I enjoyed sitting in a chair for 3 hours this much was when I was on nitrous oxide for my wisdom teeth extraction. He joked about Duterte. He joked about Trump. He joked about LGBT, blacks, whites, Asians, drug addicts, school shooters, and his mother-in-law. They’re not cheap jokes, either (literally—tickets to the Solaire shows cost as much as P25,000). If we’re offended by the material, we’re not laughing to hide our pain. We’re laughing into it.

Dorman, before she died in October 2019, came to Chapelle’s defense on Twitter after Sticks & Stones was panned: “Punching down requires you to consider yourself superior to another group. Dave Chappelle doesn't consider himself better than me in any way. He isn't punching up or punching down. He's punching lines. That's his job and he's a master of his craft.” Chapelle may not be the comedian he used to be. But we’re not the audience we used to be.