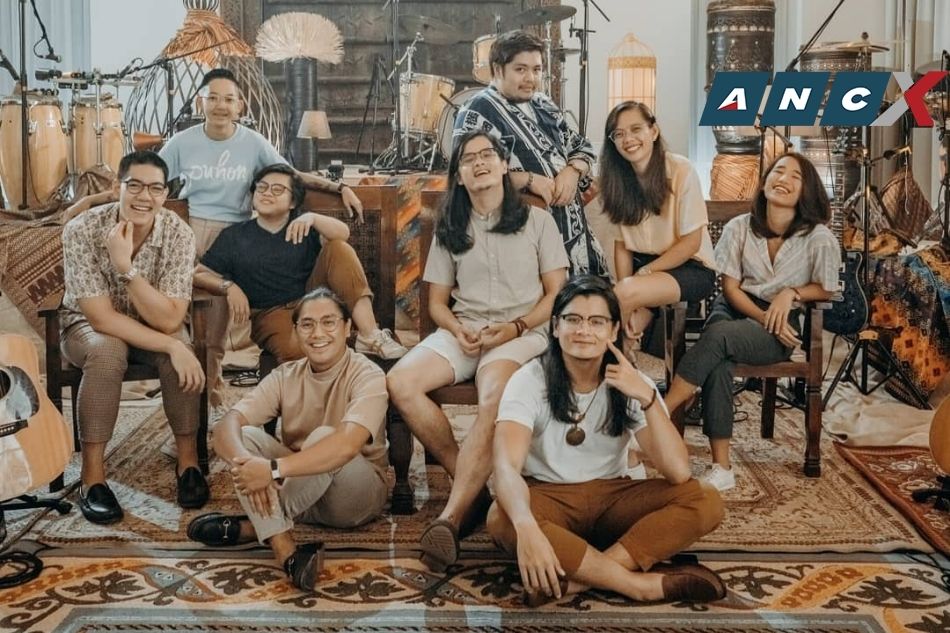 Living together in one house started out as a crazy joke, the members of Ben&Ben admit. Photo from @benandbenmusic on Instagram
Culture Music

The gang’s all here: Inside the home the 9-member Ben&Ben have been sharing on lockdown

One of the country’s sought-after bands tells us what they’ve been up to living together in one home during the quarantine
RHIA D. GRANA | Oct 04 2020
facebook twitter

Living together in one house started out as a crazy joke for the nine-member indie/folk pop band Ben&Ben. For the past three years, one of the country’s fastest-rising musical acts had been living out the typical band life of rehearsing, recording, and touring. Their calendar was always packed.

“Kasi dati, before the pandemic, we used to tour a lot, na halos hindi na kami umuuwi,” vocalist and acoustic guitarist Miguel Guico shares with ANCX via a Zoom interview.

But when the enhanced community quarantine (ECQ) was implemented, they were faced with the difficult challenge of how to keep producing music as a group. They explored a few options, which included wearing full PPEs (personal protective equipment) whenever there’s a meet up—but they figured it was too costly, and can’t really ensure the safety of everyone.

That was when they started giving the “moving in together” idea a serious thought. They decided to give it a go in July and they have been cooped up together under one roof ever since.

Their three-story residence is big enough to fit all nine of them, plus the team that helps with setting up equipment, cleaning, cooking, and other daily chores.

The house has different spaces that allow their creativity to flow, says Miguel. The third floor is their jamming room-slash-bedroom. “Dun naka-setup ang mga instruments and at meron ding bed kaya minsan dito na rin natutulog,” describes Agnes. For this interview, they set up a space jamming room, where they can all sit together comfortably in front of the camera.

The group also shares that the third floor is their all-around entertainment area, where they indulge in PlayStation and watch movies. It also has a shower room and storage closets for their clothes. “Ganun kalupit yung third floor,” says vocalist and acoustic guitarist Paolo Guico.

On the second floor are the girls’ bedrooms, a storage area, and a balcony “kung gusto mo ng alone time at mag-reflect sa buhay,” says Paolo.

I asked what can be seen from the balcony. They replied in unison—“Yero!” And we all laugh.

The ground floor is everyone’s favorite part of the house because it’s where the kitchen and dining area are.

The house also has a basketball court and a workout area, which is how they keep themselves physically active even without going out.

A day in their life

The pandemic has definitely changed their routines as a band, shares percussionist and backup vocalist Andrew de Pano. Before, their work was mostly comprised of going out and performing, but they obviously are not able to do that now—although they have been very productive in terms of being able to jam and creating new arrangements.

“Before, we need to reserve a studio, find a common time for everyone. Now, we’re all together and our studio is right here, in the third floor,” Andrew tells me.

And they don’t have to worry about just how much time they’re consuming. “Now that we live together in one house, pwede kahit mag-start ng 11am tapos mga 6pm or 9pm na kami mag-end. Yung restrictions namin sa jamming nawala. So mas free po kami to explore musically and creatively,” shares keyboardist Pat Lasaten.

But in order to not disrupt their neighbors quiet time, they’ve set a 9pm cutoff for jamming.

Asked if they are strict in terms of band schedules, Andrew answers, “We are strict in planning but not so strict in making it happen. The group agrees, laughing.

But they all agree that one of the good things about living together in one house is that while they can be a little laidback when it comes to schedules, there will surely be a time in a day when they will all meet up at the third floor and do music together.

“Nung nag-start yung ECQ, of course nasa kanya-kanyang bahay kami. We had to figure out ways to keep creating music virtually. But now that we’re together dito sa bahay—we do what we need to do together—jamming, rehearsing, writing, recording,” says Miguel.

They sure miss performing live for their fans, but they also look at the lockdown period as an opportunity to do the things they were not able to do before. “The internet allowed us to reach even further than before—like we’ve been having interviews with radio stations abroad, and we’ve also been able to reach out to other artists from other countries like Korea,” says Andrew.

Aside from creating music, they also have time to produce other content for their fans (they call them “Liwanag”), which can be found in their YouTube channel, Ben&Ben. Aside from music videos, they have already done seven episodes of BBTV (or Ben&Ben TV), a limited video series where they get to share more about themselves, aside from their music. There are episodes where they played basketball, danced the tinikling, and throw popular movie lines.

For many of us, the pandemic has been a period of realization, and this is true as well for Ben&Ben. Shares Andrew, “It really made us kind of re-evaluate the lives we were living in so many different ways. Like the things that we value, the way we spend our time, and the way we think about longevity, the future and certainty. It made us really value people, especially in our line of work—not just us, but the people involved in every production.”

Miguel adds the crisis has also taught them the band will never run out of ways to be of help and of service to others especially in this time. “We always feel like, as much as we can, hindi kami mauubusan ng will na tumulong. Kasi kumbaga, in situations like this where the whole world is suddenly in a state of chaos and disarray, it really makes you ask the question: ‘How can I do my part to better the situation we’re in right now?’”

This Sunday at 5pm, Ben&Ben is doing a fundraising show titled “Puhon 2,” which will be livestreamed on their Facebook and YouTube Channel. Says Miguel, “The goal [of this show] is to help the teachers, students cope with the new normal of distance learning, especially yung mga nasa far-flung areas na wala talagang resources.”

Asked how they would describe this period as far as the band is concerned, different words come out from each of them—transformative, creative, historic, breakthrough, a time of great friendship, a time of trial, a time to have fun together as a family. Miguel turns more serious, and as if throwing in a line for their next single, says: “Ito ay panahon kung saan mahahanap mo ang liwanag sa sarili mo.”