Zachary Levi on playing a man-child in Shazam! 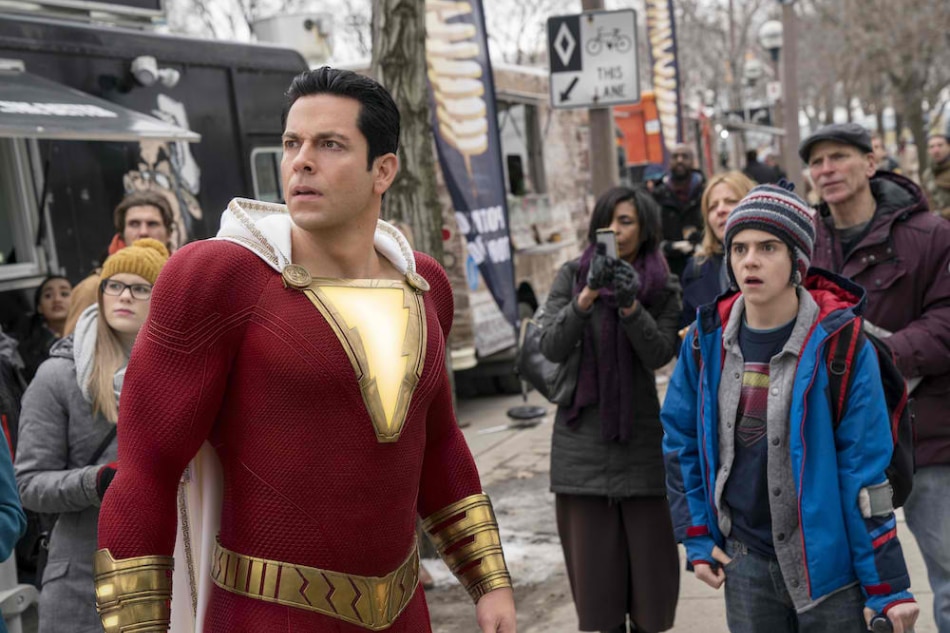 Zachary Levi on playing a man-child in Shazam!

Just before the (thank God) lighthearted DCEU origin movie hits theaters, the actor shares his experiences playing the titular character. It’s a chance, he surmises, to show a superhero that doesn’t take himself too seriously, and is “tickled” by his abilities.
ANCX | Mar 30 2019
facebook twitter

For Shazam!, the latest film in the DC extended universe, finding someone with a, shall we say, youthful nature is vital in casting. “It was important to find someone who could feel like a kid in a grownup’s body.  I think a mistake a lot of people make when grownups try to play kids is that they just sort of lower the IQ, just play it dumber,” says director David F. Sandberg. “And kids aren’t dumber, they’re just inexperienced, and more enthusiastic about life. And they don't have the filter that a lot of adults have. So that’s what we were looking for and what we absolutely found in Zachary Levi.”

In the film, 14-year-old foster kid Billy Batson (Asher Angel), imbued by the magic of an ancient wizard, can turn into the adult superhero Shazam (Levi), by shouting out the superhero’s name.  Still a kid at heart—inside a ripped, godlike body—Shazam revels in this adult version of himself by doing what any teen would do with superpowers.

Levi, who is no stranger to either blockbusters (Thor: The Dark World) and humorous roles (Tangled, Chuck), was thrilled with the opportunity to tap into the 14-year-old in him. “I don’t want to say I’m a man-child,” he jokes, “but I happen to be an enthusiastic, hopeful, energy-filled type of person. So, to show up on set and get to play this character, and fly around and fight bad guys? I was totally in! I was so eager to shoot every scene of this film, to be able to bring not just a really badass Super Hero to life, but one who has so much heart and charm and humor.”

He surmises that growing up reading comic books and playing video games probably set him on a particular trajectory, but still, “the scene where the Wizard first transforms Billy into Shazam and he hears his voice for the first time—and it’s my voice! I couldn’t wait for that moment.” Or, to act out the moments “when he sees his reflection for the first time, the whole montage of him learning what his powers are.” Levi adds.

In addition to admiring the hero his character would become, Angel, in turn, found a lot about Billy to appreciate. “Billy’s had a hard life but he’s a smart, street-savvy kid. And yeah, he’s a little sneaky, too, but he’s had to be.  He’s been his own guardian, he’s had no one, which has kind of been his choice because he just wants to find his mom. So, he’s had to do everything for himself in order to stay alive and look for her.”

As they are two sides of the same character, Angel and Levi naturally never share the screen. However, they did spend a little time together and with Sandberg hashing out some general mannerisms that they could share in their portrayals. “We needed to find some common ground to give both performances a similar essence.  Billy has a sarcastic streak, and we both picked right up on that,” Levi says.

“It was important for us to figure out each other’s mannerisms and do some things the same so the audience will always understand it’s the same person on screen,” Angel agrees.  The pair first met at a premiere for another film, where, Angel says, “Zac just said, ‘What’s up, Billy?’ and was so energetic and so much fun, and just a sweet, humble guy.”

Best of both worlds

Levi says that to play a boy in a grown man’s body was really about straddling the two sides of himself. “Kids don’t get bogged down with life the way adults do. They’re not dealing with 401ks or mortgages; they’re just going to school and thinking, ‘I really don’t wanna go to math right now.’  They haven’t built the catalogue of experiences in their journey to adult wisdom yet to understand why things are the way they are.

“But even as an adult, and especially as an actor,” he continues, “I’ve always tried to maintain a lust for life, along with enthusiasm and sincerity, which I think is what most kids just exude naturally. Up to a point, they have a purity of heart, and I think that’s what’s so great about this story and what’s unique about Billy specifically. He is pure of heart, and that’s why the Wizard endows him with this power. And that’s a big gamble—giving this 14-year-old kid the power of the gods.”

Along with the wisdom of Solomon, the strength of Hercules, the endurance of Atlas, the power of Zeus, the fighting abilities of Achilles, and the speed of Mercury, “He’s also got the ability to wield lightning, which is very much in tune with his ‘Zeusitude,’ if I can be so bold as to call it ‘Zeusitude.’ I’m coining that phrase right now,” Levi quips.

On set, the actor had as much fun with the discovery of Shazam’s powers as the character did. “One of the moments that just delighted me was the scene when he’s stopping the robbery, and he figures out he has bullet immunity.  Basically, he just starts giggling because the bullets literally tickle him.” Long before production began, just reading the scene, Levi confesses, “I just lost it, I started laughing out loud, legitimately LOL-ing by myself in my living room.”

And that’s what it is for the 38-year-old: the joy of that moment. “You don’t get to see Batman or Superman being tickled by their abilities. Those guys are dudes who’ve had a lot on their shoulders for a long time, while Billy’s just stepping into this world. You get to experience his delight, and I just loved it.”

Shazam! will be in Manila theaters starting April 3.