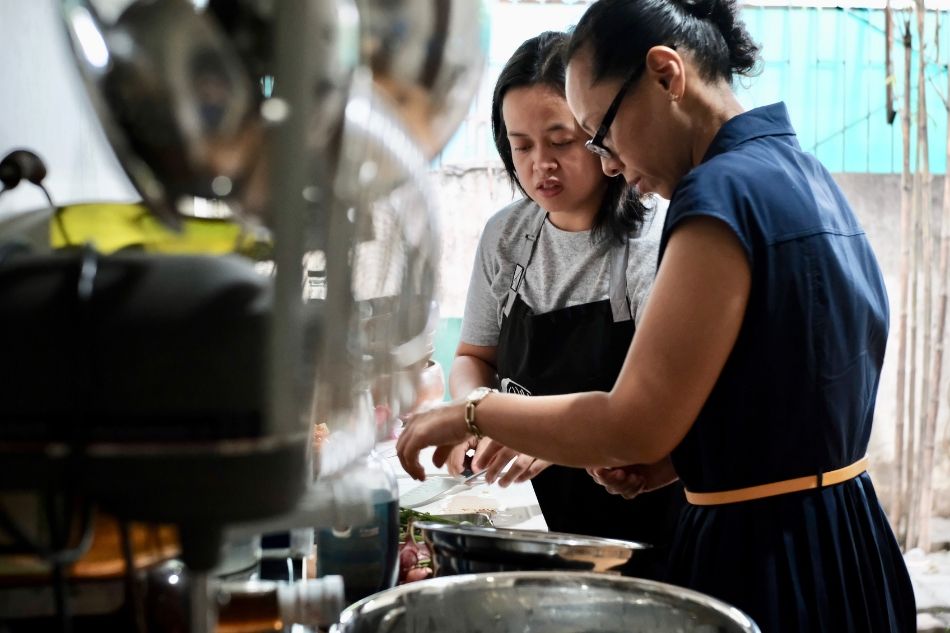 Down and dirty: While Traveling Spoon's Isi Laureano has a nice indoor kitchen, she and her guests prefer to use this kitchen at the back of her QC home. Photos by Chris Clemente
Food & Drink Restaurants

Through Traveling Spoon, Isi Laureano has become a quiet ambassador of Filipino cuisine, offering travelers a taste of what Pinoy homecooking is all about by allowing them into her kitchen—and enjoining their help in making their own Pinoy spread
Dahl Bennett | Aug 27 2019
facebook twitter

Nothing says Filipino more than a malunggay tree towering over a front gate, piles of shoes by the main door, and a dirty kitchen at the back of the house. You will find these features in Isi Laureano’s home inside a private village in Quezon City. And just as well. Foreigners come here to get a taste of Pinoy flavor, and maybe assist in its making.

Laureano has been welcoming tourists from all over the world to her address for four years now. She is one of the pioneering Filipino hosts of Traveling Spoon, an online platform that allows travelers to book and experience in-home cooking and eating. Think back to your rare visits to the province where you join your mother or lola to the palengke. Where you watch them prepare your favorite dishes from scratch, and once in a while you get to slice some tomatoes and onions and join in the fun.

The same principle goes into Traveling Spoon, and lucky are those who find their way to Laureno’s home. More often than not, she will be offering you one of her family’s traditional recipes along with her version of Filipino comfort dishes. “Traveling spoon is a home-based experience talaga. It’s like cooking with a mom or eating with a family,” Laureano says.

This mother of one is a graduate of the International School for Culinary Arts and Hotel Management (ISCAHM) and has been in the business of food for 10 years now, previously in the capacity of a food stylist and photographer. Currently, she divides her time between hosting for Traveling Spoon and being a private chef. On the side, she also manages her business of bottled chili products which she sells online and in bazaars. Her brand is called Chili Asylum.

She says it was only by chance that she learned about Traveling Spoon. It was a friend who received an email from the start-up company. “Sabi niya ‘Isi, I think you can do this.’ She forwarded me the email, and then I emailed the owner, Ashee (Vel), telling her that I’m interested,” Laureno recounts. “At first, I was kind of skeptical about joining. My family was skeptical, too, because we’re opening our house to strangers. Siyempre, my mom was like, vine-vet ba nila yan?” Laureano shares the same Quezon City house with her mom, dad, and son.

Vel eventually interviewed Laureno through Skype and personally came to the Philippines to vet the Manilenya, observed how she was as a host and decided she embodies the philosophy of the company. It doesn’t take much effort to see what convinced Vel: Laureano is friendly and relaxed, devoid of pretensions and quickly connects with guests. We can imagine hanging out with her even after lunch has been wiped off the plates—as some of her guests have done in the past.

“Off the eaten path” was a tagline Traveling Spoon used to carry and it anchors its service on ‘meaningful experiences’ and ‘connecting with locals through food. “When Ashee came here and asked why I wanted to do this, I said why not? I don’t need to open a restaurant or hire employees. I don’t have any rent. It’s just really a tour of my own home and getting to share what I like about the Philippines,” she says.

Traveling Spoon was founded by Vel and Steph Lawrence in San Francisco in 2013. They initially introduced it in India and soon found other willing hosts around Asia. Today, there are hosts located in 150 destinations in 50 countries. They open their homes to travelers who want a taste of local cuisine and a slice of homegrown culture. The platform also offers market visits and cooking classes at slightly higher fees.

Four years into hosting, Laureano has embraced Traveling Spoon because it allows her the flexibility she needs. “It’s really a very liberating platform. I would usually get a booking through email and it is up to me to say ‘yes’ or ‘no.’ Naka-depend ang booking sa host. It’s not like a job na you have to do it all the time. Actually, we can update our profile anytime like, say, I can only do the market tour na lang during weekends or I block the whole month ahead. It’s really up to me.”

The requirements to be a host are reasonable and straightforward, says Laureno. “It has to be your home, that’s the number one priority. Dapat hindi siya restaurant unless you live there and you just happen to have a restaurant.” They are not also as strict with nationality. “We have a host in Manila who’s a foreigner, and that’s fine. There is also no requirement that you should be a chef,” says Laureno who adds that she can be anywhere in the Philippines and still be a host.

As Laureano discovered, her guests easily get excited when they learn about Filipino culture no matter how small.  Entering the chef’s dirty kitchen alone amazes them. “Pag nakita nila, sasabihin nila ‘I want something like this’ Or ‘Oh another kitchen!’ Nakakatuwa lang because [it gives them an] idea of how Filipinos cook.” Another treat for her guest, she says, is when she asks them to squeeze grated coconuts for the gata she will use in her dishes. “Tuwang-tuwa sila. In just this small space you can actually educate them about  Filipino cuisine and how we do it.”

Perhaps the only setback for most Manila hosts and their guests is the ‘soul-sucking’ traffic of Manila. This was the term used by Chicago Tribune Travel Editor Lori Rackl in her recent article about Traveling Spoon featuring Laureano as host. This everyday Filipino predicament, of course, is not lost on Laureano who says there were times when guests couldn’t make it at all because of traffic. “There are times na nakakahiya na but they also understand. Sila pa minsan nahihiya kasi sila ang late,” she laments.

Adding her own twist

On the day of ANCX’s visit to Laureano’s home, she prepared a seafood spread that had us helping out in the preparation. Laureano says she makes dishes that represent typical Filipino meals but adds her own twist to them where she can. Her adobo, for example, deviates from the usual pork and chicken and uses squid instead. For a twist, she adds coconut milk to give it a more complex flavor.

While not common to Filipino dishes, she employs spices such as cilantro, galangal, and curry and kaffir leaves when available. Her sautéed sugpo are marinated in most of these herbs and given a squeeze of the most quintessential of Filipino ingredient—kalamansi. Her Pinalamanang Bangus is stuffed with the same herbs but since a neighbor gave her a bunch of kamias earlier, she adds them to the mix. The native santol her uncle gave her the other day ends up as a sinantolan which she cooked in gata to pair with the bangus.

“One thing I also like about this business is that I get fresh produce from the farms of my friends. Sometimes, I would message them for orders,” she says. What is especially rewarding is that she is able to help local farmers and advocate the farm-to-table concept, which Traveling Spoon encourages among hosts.

Perhaps one of the biggest treats her guests will get out of the Traveling Spoon experience is tasting a traditional family recipe. Laureano often has one prepared ahead of time such as the Beef Mechado which, with her recipe, takes a whole weekend to do. Her version is true to the tradition of sticking pork fat at the center of a block of beef meat like a wick to a candle. Like a true Malabonian, Laureano marinates the beef overnight in soy sauce and her hometown’s signature condiment, patis. The beef, along with the marinade, is then boiled for hours in a pot instead of a pressure cooker. It is only done until the beef juices, marinade, and generous amounts of onions, tomatoes, and bell peppers are reduced to a thick dark sauce.

Guests often don’t witness such a laborious process, but they get to participate in making the rest of their meal. It’s a great way to learn about our culture in a most intimate manner:  sharing in the making of a Filipino meal in a modern Filipino home—without the usual artifice of a bahay kubo extravaganza.