From growing bees to coffee trees, this Belgian national is helping Camiguin nurture its gifts 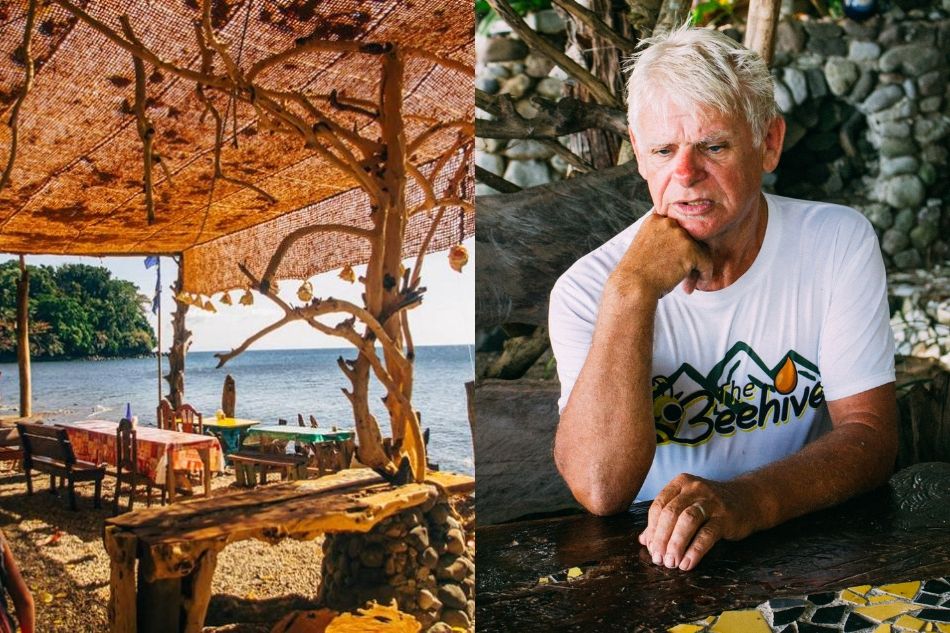 From growing bees to coffee trees, this Belgian national is helping Camiguin nurture its gifts

A stopover in a driftwood café called The Beehive allowed us to meet a beekeeper/farmer/designer/culinary whiz who’s doing so much to improve the lives of Camiguingnons.
Rhia Diomampo Grana | Aug 04 2019
facebook twitter

Belgian national Raphael Lemmens is a man of many passions, and some of these passions brought him in and out of the  Philippines for a time. His name easily pops up on Google as the designer of the Riverstone Castle in Argao, Cebu, a structure entirely built from Argao river stones — thus the name — and designed like the European castles in the Medieval times. It was built in 2002 in memory of Jesus Galegos, one of the renowned artists who came from Argao.

But when Raphael came back to the Philippines in 2009, particularly in the majestic island of Camiguin, it was for a totally different reason—he was looking for the ideal place where he can breed queen bees to supply the Philippine bee industry. “It is best to grow bees in a small island because the bees don’t fly over to the sea; they can grow their genes,” he explains.

You can say Raphael’s venture is a bit more ambitious—not to mention, expensive—than the typical beekeeping enterprises in the country, precisely because he works only with European honeybees. “The bees were imported from Caucasus, Russia, where temperature reaches -50°C during winter and 50°C during summer. The bees are very strong. We flew them over to Camiguin, bred them on the island about nine years ago. We’ve been very successful. We have a good breed of bees that make good honey,” he says.

Choosing Camiguin for his beekeeping project led to another fruitful discovery—the volcanic island also grows one of the country’s best-tasting coffee beans. “I love their native coffee,” the Belgian national beams. Raphael had an experience selling coffee in Belgium and also had the chance to study it in Thailand, and so armed with his knowledge spoke to the coffee farmers of the island. “I told them, ‘If you can multiply the coffee varieties, I will show you the market.’”

The specific site that Raphael identified to grow his coffee dreams was Mt. Tres Marias, called as such because of the three beautiful peaks that comprise it.

However, the farmers were discouraged to plant coffee because the transportation to the mainland is very expensive. It was not going to be beneficial for the farmers. “So what I did was I invested in the machines and other things that they need for coffee processing,” recalls Raphael, “including solar dryers. Now, we have 20 farmers who produce for our brand that is now called Tres Marias Coffee.”

Things have fallen perfectly into place, as the pursuits of beekeeping and growing coffee melded very well. “The bees provide good pollination for the coffee trees so we have a better coffee harvest—its working together,” Raphael offers. Camiguin’s rich volcanic soil has become very good and nurturing for growing coffee. Raphael employs permaculture, the conscious design and maintenance of agriculturally productive sites which have the diversity, stability, and resilience of natural ecosystems. “We use the forest areas to plant the coffee; they are grown organically and naturally,” says Raphael.

The Beehive Camiguin Driftwood Café, nicely located at the beachfront of Zone 1, Catibac, Catarman, Camiguin, is a product of Raphael’s resourcefulness and imagination. “When I started collecting driftwood on the seashore and around the rivers, my wife got a little worried as to what I’ll do with all the firewood. My neighbors were thinking, ‘There is something wrong with the foreigner, he’s collecting wood,’” Raphael remembers. As it turned out, the naturally creative Raphael was up to something. “I wanted to do an interesting design made out of discarded materials that guests here in Camiguin can enjoy visiting and taking pictures of.”

He built the café about four years ago and made use of a variety of sturdy woods, including madre de cacao. “We have a lot of good wood here, but sadly Filipinos only make charcoal with them because they are not straight. But me, I love it!” he says.

Visiting the café, one can see that the beachfront of Catarman—and the beautiful sunrise and sunset—serve as a perfect backdrop to Raphael’s masterpiece. The relaxing sight is best enjoyed with the café’s healthy offerings, a product of Raphael’s inventiveness and culinary flair — he hails from a family who loves to cook and had run food businesses in Belgium for a long time. He’s an advocate of healthy living and promotes farm-to-table cuisine.

They serve all sorts of food in Beehive, although mostly European-inspired. The cafe also makes use of healthy ingredients. “We serve salads with fresh greens and flowers freshly picked from our garden. We serve cordon bleu, but we prepare it in a special way—we add herbs, smoke the ham a little bit, so it tastes different,” he shares. The cafe also serves homemade ice cream with herbs like moringa (malunggay) and butterfly pea flower, and locally grown organic fruits like guyabano, dragonfruit, and lanzones. Raphael also incorporates honey in their offerings.

The Beehive serves coffee concoctions in myriad ways—Dripp, Italian, Russian, Moroccan, European, Vietnamese, Caferiere (French press), Turk, and Caribbean. Their beans are all locally grown, but he also serves coffee from  Bukidnon. He has also introduced macadamia coffee at the café and has also started farming macadamias. “I’ve been doing a lot of trials, I planted a lot of trees to see how they will perform. But I’m pretty sure, we will be successful. My dream is to make Camiguin the Macadamia Capital of the Philippines,” he says with optimism.

Proudly displayed at the café is a selection of locally produced organic products—marmalades (made with locally grown fruits and honey), homemade peanut butter, coffee, tablea (with a bit of cinnamon and honey), coco sugar, turmeric, and cookies.

Like Raphael in his early days in Camiguin, the first-timer to the island will discover the place’s myriad charms and fall in love—not only with the bees and coffee trees, eventually taking on its character.  The Beehive proprietor may be European but he already radiates the fun-loving, friendly, and hospitable nature of the island’s people.