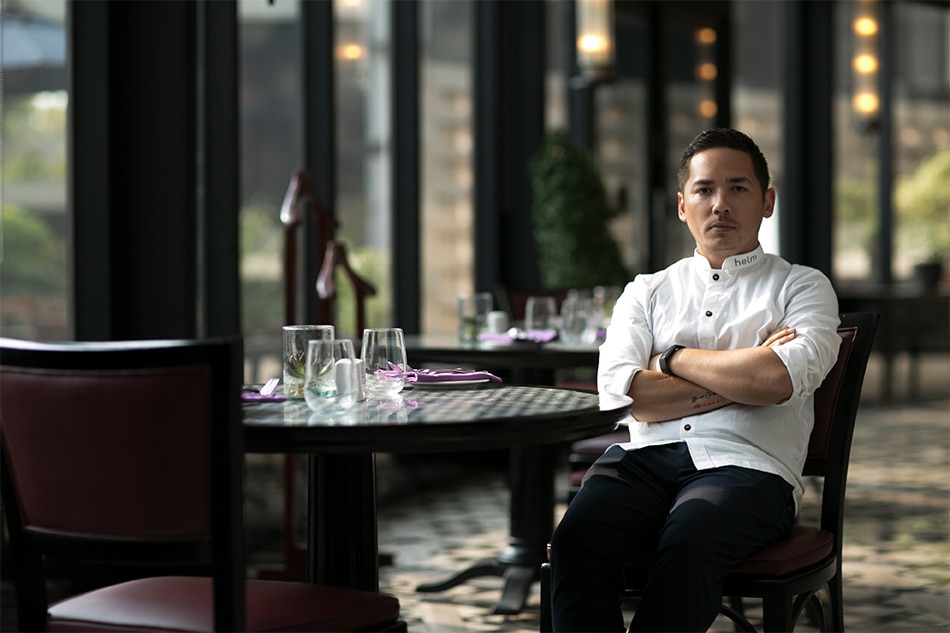 While the Bistro Group executive chef is a big believer in decreasing our carbon footprint, he remains realistic that the Philippines just isn’t there yet. “Right now, it seems to be pretty far away,” he admits
Mandy Altura | Jul 25 2019
facebook twitter

Despite his continued success, Josh Boutwood admits that there have been frustrations when it came to his culinary journey in the country. One such challenge is his goal of zero-waste operations at his restaurants Helm and Savage. “Aside from serving really good food and good service, nice ambiance, zero-waste was my mantra,” he says.

Unfortunately, some things beyond his control have become roadblocks to this goal, forcing him to pivot to something more realistic. “Since we opened, it became apparent to me that it was impossible to achieve this, and the reason was outside,” he shares to Chef Jam Melchor in an episode of Heroes & Titans, ANCX’s video series on making the world a better place.

“It was on the side of our suppliers, of our logistics, of everything. I have to put up my hands and say: ‘it’s actually impossible for me to create a zero-waste inclusive restaurant currently within the Philippines.” Boutwood acknowledges the number of plastics from suppliers, saying that one batch can quickly fill up a garbage can in a day. “We try to educate our suppliers,” he says, “but, we feel that it is David against Goliath.”

But the chef does hope that zero-waste will become possible in the future. “One day, hopefully, we’ll be able to achieve a 100 percent zero-waste restaurant. But right now, it seems to be pretty far away.”

As executive chef of The Bistro Group, Boutwood has to put on many hats. In his corporate role, Boutwood describes himself as extremely meticulous, and forward-thinking. “I’m within a box, and within that box, we have a lot to take into account, we have to take in the costing, trainability of teachers, market trends,” he says. “And we cannot just step outside of that box. When we step outside of that box, we might open a kind of worms and create a lot of problems within the restaurant.”

He believes in the total dining experience, the bigger picture it represents, rather than just the food. Helm, for example, focuses on trying to promote Filipino ingredients from all over the country. “We try to resource local as much as possible, and also deliver a particular experience to the guests that match what we want to give them,” he says. “We want them to form a memory inside the restaurant.”

At the same time, Boutwood thinks that it’s hard for him to promote the Filipino cuisine because of his upbringing. “I’m not 100 percent Filipino. My mom is English, my dad is Filipino and I didn’t grow up in the Philippines. I grew up in Spain,” he says. “I feel like I’m being an imposter whenever somebody asks me to try and promote Filipino food.”

Yet this disconnect allows him to be more free with innovating dishes, as he does not have to put much focus on promoting culture as much as other Filipino chefs. “I’ve always said innovation over tradition. Keep innovation high; tradition, lower than innovation. In that way there’s growth,” he says, “If we keep tradition higher than innovation, essentially, we’ll be going backward.”

Above all, Boutwood is still a chef at heart, and his love for cooking manages to shine through his business. He recalls a moment wherein a group of customers didn’t understand the concept of “community sitting” and were apprehensive about sitting next to strangers. This didn’t discourage him, and he took it as a challenge instead. “I said to my team, at that time it’s just the three of us in the kitchen,” he remembers, “Our mission tonight is to make sure that these guys’ frowns turn upside down.” With his determination, it only took two dishes for that to happen.

His two hats, as Boutwood would describe it, force him to balance his talents, as he cannot choose to focus on one over the other. On the other hand, his two roles give him the ability to see the whole picture.

“At the end of the day, we are a business. Even though we enjoy what we are doing, we still have people to pay, and my team has families that they need to feed, and that’s always going to take our priority over the majority of issues facing our environment today,” he says, “But of course, if we are able to create a certain dialogue between our beliefs system and operational sample, I think that’s the way to the future.