There’s nothing Spanish about adobo—should we ditch its Spanish name? 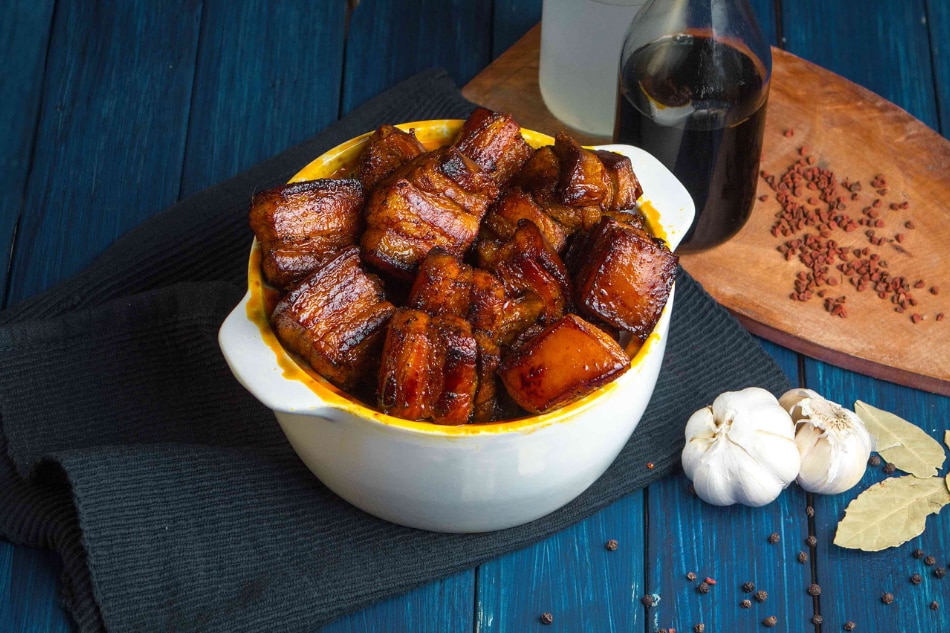 There’s nothing Spanish about adobo—should we ditch its Spanish name?

Filipino chefs and food historians have reclaimed the quintessential adobo as indigenous and pre-Hispanic, rather than as an import from Spain. They have also been debating its Spanish name, as a remnant of Spain’s colonial rule.
Barbara Mae Naredo Dacanay | May 01 2019
facebook twitter

More akin to a vinegar-based cooking technique than a specific dish, adobo counts endless variations across the different regions, and even around the world thanks to overseas Filipinos. Now, adobo’s origin and a possible logical pursuit of its old pre-colonial name that was lost in translation are heatedly discussed at the table.

Pedro de San Buenaventura, a Franciscan missionary, was the first European to write about adobo de los naturales (adobo of ethnic Filipinos or their dishes with vinegar) in Vocabulario de la Lengua Tagala, published in Pila, Laguna in 1613.

“It is commonly (and wrongly) known that adobo was born with Spanish colonization that began in 1521… The word ‘adobo’ was the way the Spanish people recognized the indigenous dishes they saw when they arrived in the Philippines. Adobo is as Spanish and also as Filipino,” says Chef Borja Sanchez, a graduate student in Social Anthropology, who delivered a lecture in Ateneo de Manila University as part of the Filipino Food Month celebration.

Filipinos’ lavish use of vinegar from coconut, kaong palm, nipa palm, and sugarcane to preserve and flavor dishes began as far back as the Austronesian period, proof that the vinegar-laced dishes that Buenaventura described as adobo in 1613 were pre-Hispanic. This was the argument of food writer Pia Lim-Castillo in her chapter on “Traditional Philippine Vinegar and Their Role in Shaping the Culinary Culture” in the book Authenticity in the Kitchen (2006) based on talks given at the Oxford Symposium on Food and Cookery.

However, Sanchez believes there is a connection between Spain’s adobo and the Philippine version, as evidenced by the writings of Ruperto Nola (Libro de Cocina, 1529) and Diego Granado (El Arte de la Cozina, 1599) on the Galleon trade. “Spices from the Philippines (and other Asian countries that traded with Manila prior to Spain’s monopoly) enhanced the making of adobo and other dishes in Spain,” explains Sanchez.

So why was adobo’s original name was never correctly recorded by Spanish documentarists such as Nola, Granado, and Buenaventura? Food writer and historian Guillermo “Ige” Ramos of Republic of Taste Food Network answers, “The indigenous Filipinos were teaching recipes orally, or with documents that were written in Baybayin and other scripts. The Spanish colonials destroyed these manuscripts and replaced them with Romanized dictionaries.”

Buenaventura’s willful obliteration of the original names of the Philippines’ indigenous dishes cooked in vinegar and stubborn description of them with a Spanish word like “adobo” was a case of “lexical imperialism,” posits renowned American food writer and critic Raymond Sokolov in his 1991 bestseller, Why We Eat What We Eat: How Columbus Changed the Way the World Eats. “(The) Filipino adobo stands by itself, fully formed and always distinct from the adobo dishes of Mexico and Spain.”

Correcting Buenaventura’s text in their book Kinilaw (1991), food writers Doreen Fernandez and Edilberto Alegre assert, “The Spanish (word) adobo is (actually) a pickling sauce rather than a dish. (The Spanish dish adobado is pork marinated for weeks in adobo sauce, made of vinegar, olive oil, garlic, thyme, laurel leaf, oregano, paprika, and salt). The Philippine dish we call adobo (today) is the opposite (a dish rather than a sauce), but pickled—(or) cooked in a sauce (of vinegar). Small wonders then that the Spaniard (Buenaventura) should see the fish or meat (cooked) in vinegar as adobo of the native peoples.” Fernandez had aggressively reclaimed adobo as indigenous Philippine food at the Oxford Symposium until her death in 2002.

Adobo by any name

Can we still reclaim the original name of what we now call adobo? According to Ige Ramos, pre-Hispanic adobo dishes as seen by Buenaventura in 1611 were basically kinilaw, cooked in vinegar without soy sauce. “The kinilaw dish made of pig liver cooked in vinegar, garlic, and pepper in Pampanga tastes like adobo,” adds Clarita Lapus, owner of Mama Sita, manufacturer of processed Philippine condiments. But then, today’s kinilaw is considered mainly raw seafood in vinegar, not to be conflated with what we know as adobo.

Patrice Anne Santiago of Slow Food Youth Network (SFYN) argues, “I believe that adobo is pre-Hispanic and indigenous. It is significant to every Filipino. It is part of our identity. We shouldn’t change its name. It might lead to losing its identity.” The issue should not be resolved with a change of name, concurred Borja Sanchez.

Explaining adobo’s history of fusion, Chef Datu Shariff Pendatun describes, “Adobo is an expression of our culinary history: local in ingredients, tinted with Chinese flair, Hispanic in affiliation, and regional in provenance.” While he chose not to give it a new name, Clang Garcia, president of Eat Your History, on the other hand, recommended the term “Filipino adobo.”

Endless improvisations by cooks and chefs have resulted in many-hued adobos across the country, from dark to light. Popular nationwide, classic dark adobo is usually pork and chicken stewed in vinegar, soy sauce, garlic, brown laurel leaves, and black peppercorns. Squid adobo (sans meat) is darker because of the squid ink.

In Cavite and Pampanga, a brownish adobo is braised in mashed pork liver (instead of soy sauce), together with vinegar, white coconut milk, garlic, laurel leaves, and peppercorns.

In Batangas, reddish adobo is cooked in annatto (or red achuete instead of soy sauce) together with vinegar, garlic, laurel leaves, and peppercorns. A similar adobo in Laguna uses turmeric instead of annatto to attain a yellow color.

In Bicol in southern Luzon, white adobo is simmered in white coconut milk (instead of soy sauce) with white vinegar, garlic, and green chili peppers (instead of brown laurel leaves and black peppercorns). A similar variation is also done by the Moros in Mindanao. 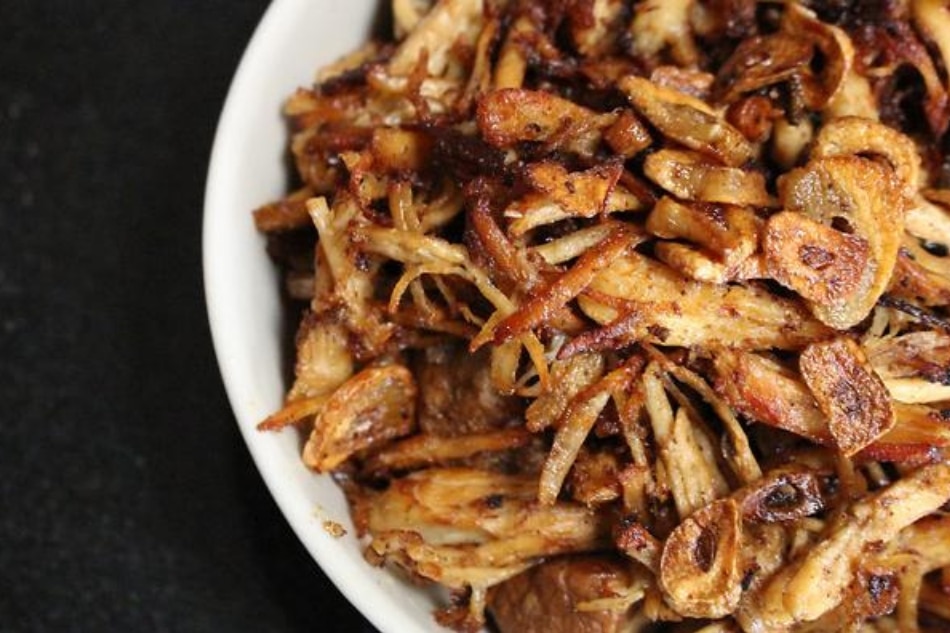 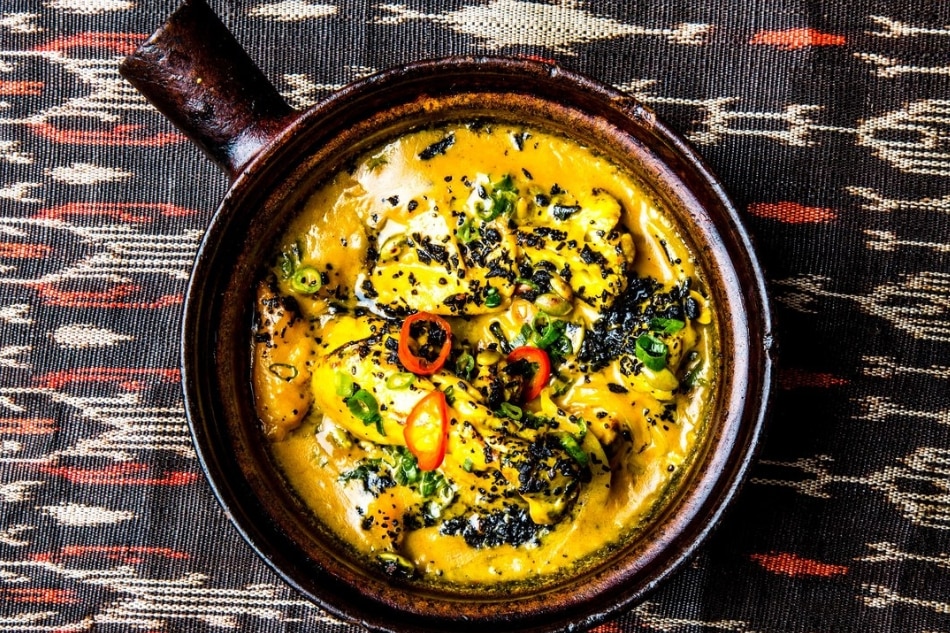 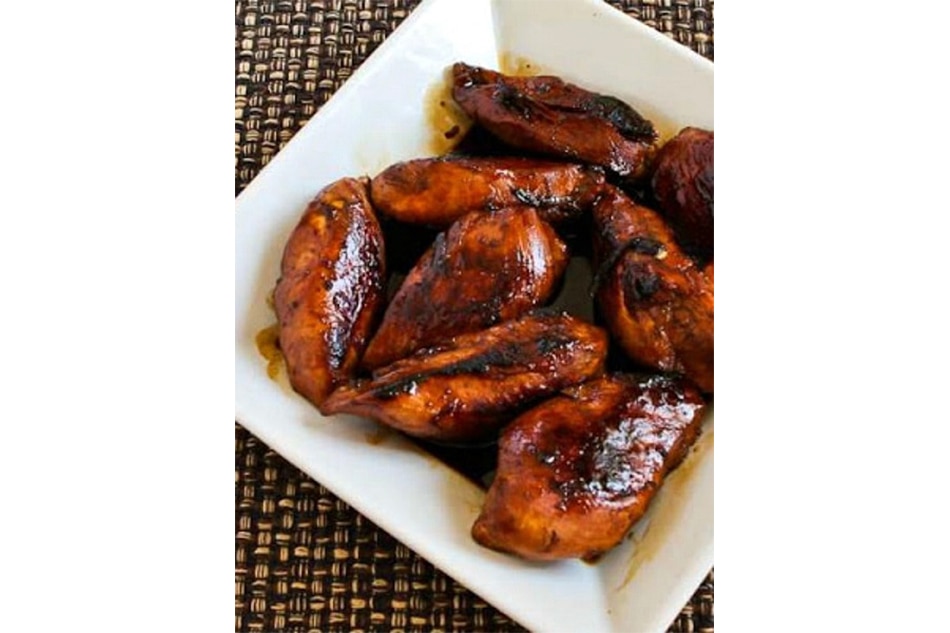 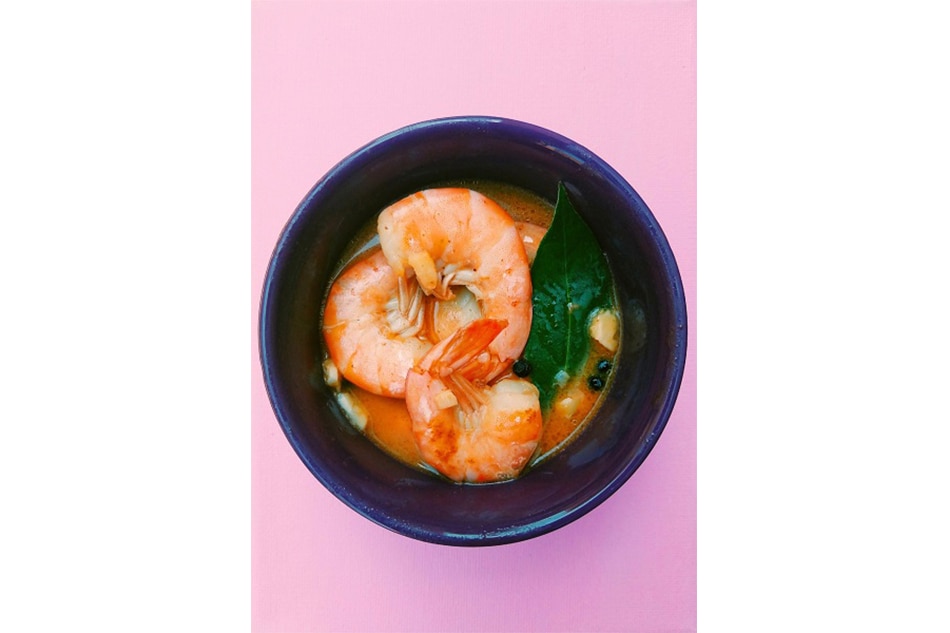 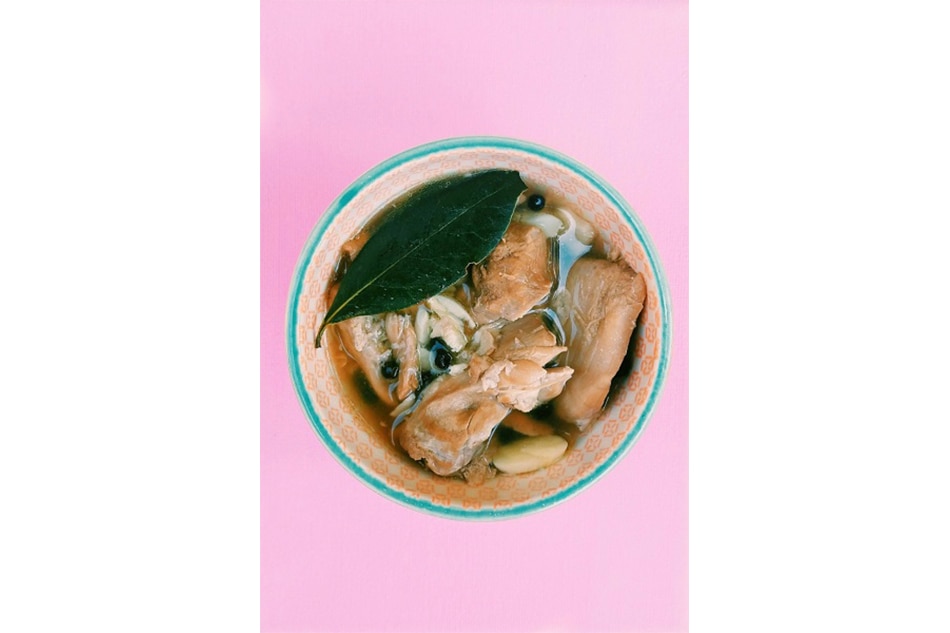 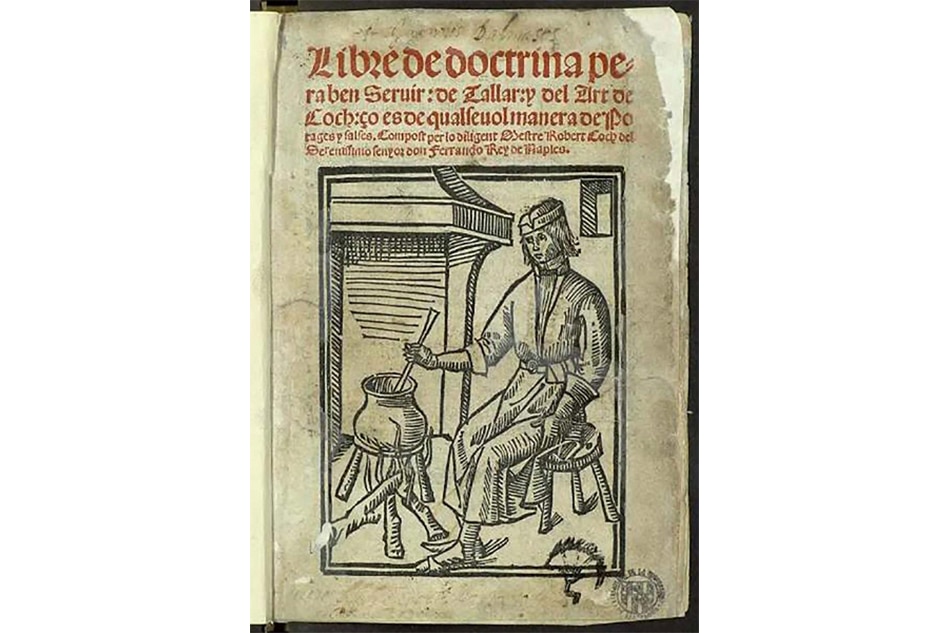 Yellow chicken adobo, with turmeric and without soy sauce.

Yellow chicken adobo, with turmeric and without soy sauce.

Photocopy of cover of Libro de Cocina by Ruperto Nola (1529) and El Arte de la Cozina by Diego Granado (1599) shows a list of spices (and other) ingredients from the Philippines, for Spain's adobo,  – during Spain’s imposition of Galleon Trade, a monopoly, between Manila and Mexico’s Acapulco for 250 years, from 1526 to 1812, presented by  Borja Sanchez, 27,  chef and a graduate student of Social Anthropology at Ateneo University, during a lecture on food anthropology at Arete auditorium in early April.

Filipina-American Cristeta Comerford, executive chef at the White House during the time of former President Barack Obama, was lauded for her skinless chicken adobo. Sheldon Simeon, a Hawaii-based Filipino-American chef made pork belly adobo with mungo purée during the TV show Top Chef in 2013.

While the term “adobo” was imposed on Filipinos by our Spanish colonizers, the name has stuck, expressing our history and identity through a multifaceted dish that continues to spawn countless versions.