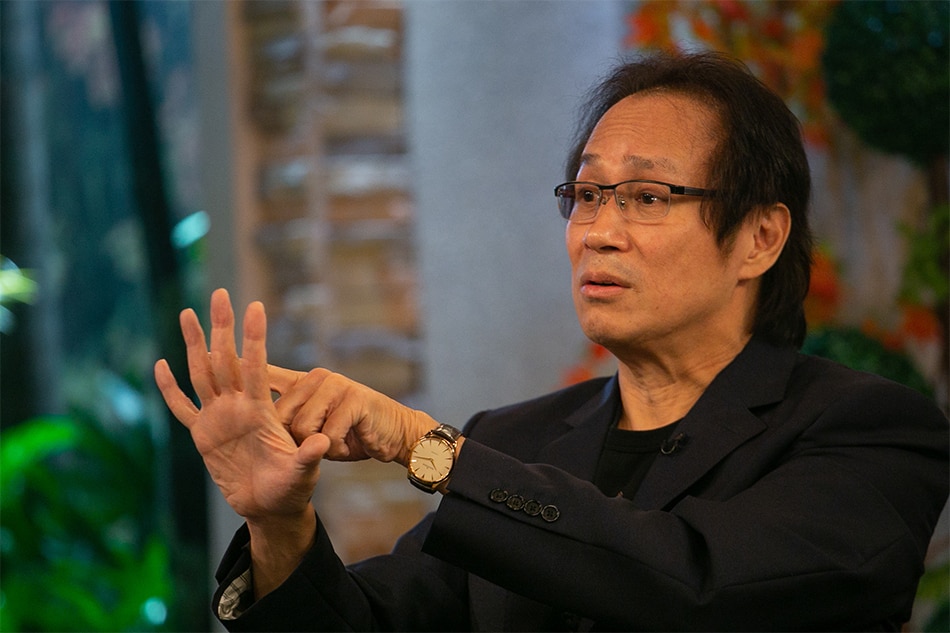 In tonight’s exclusive TV Patrol interview, the controversial businessman talked about how he got connected with the Barrettos, denied having romantic relations with Gretchen and Claudine, and related his own story on what really happened that Wednesday night at the wake of the Barretto patriarch Miguel.
ANCX Staff | Oct 24 2019
facebook twitter

In an exclusive interview with TV Patrol Thursday, Charlie “Atong” Ang categorically denied having had romantic relations with sisters Gretchen and Claudine Barretto. The controversial businessman also told his own version of what really happened during Miguel Barretto’s wake Wednesday last week. A supposed altercation between Gretchen and Marjorie Barretto the evening of October 16 at Heritage Park Chapels has been the talk of the town since, a supposed catfight which has sparked threats and accusations from the two sisters’ camps, and the public airing of quite a load of the Barretto family’s dirty laundry. “Lahat tayo meron tayong malungkot na buhay at saka masama. Walang perfect na buhay kapareho ng sabi mo, Marjorie,” Ang said, referring to a quote from Marjorie from her earlier interview with Karen Davila. “Lahat tayo may nakatago. Pero kung meron tayong mga nakatago na medyo hindi maganda, itago na lang natin. Huwag na nating i-expose.”

Wearing a pair of glasses, jeans, and a dark jacket over a black D&G shirt, Ang confidently answered all of TV Patrol anchor Noli de Castro’s questions, occasionally looking straight to the camera when addressing Marjorie, or Nicole Barretto, the 26-year old niece of Marjorie, Gretchen and Claudine, the young lady who earlier referred to Ang as her boyfriend. It was through Nicole’s leaked Instagram direct messages that Ang’s name figured in this most recent Barretto family feud.

The businessman practically walked De Castro through his history with the Barrettos, beginning with his business relations with Marichi Ramos, the wife of J.J. Barretto, mother of Nicole. He said she helped him with his business operations through her network. They worked together for five to six years, and in that span of time her family had become close to Ang's family. After graduation, Nicole started working for Ang as well, fixing the frequent traveler’s flights and itinerary, doing errands for him. “Masipag na bata yan eh,” he said of Nicole. “Naging parang anak ko yan eh.”

It was actually Nicole, according to Ang, who would bring the businessman to Barretto family occasions, telling him he was invited to this gathering and that. He remembered visiting Marjorie’s house two or three times because “sabi ni Nicole pinapaimbita daw ako.” He first saw Gretchen at a dinner in a Greenhills restaurant after the mother of Claudine’s now ex Raymart Santiago passed away. He would see her again in her brother Mito’s house in Merville, Paranaque. "Kaya naman kami nagkakasama ni Gretchen dahil si Nicole din ang nagsasama sa akin."

It was Gretchen’s longtime partner Tonyboy Cojuangco whom Ang first became friends with. Tonyboy would eventually become his business partner, and soon enough Gretchen would follow suit, investing in his casino business and even his cockfighting business. He eventually became close to Gretchen, and they would be seen together in public — sightings that would spark rumors the two are indeed an item. Ang says she goes with him to the casinos because “tinitingnan niya mga sales namin.” When they eat out and shop, it’s always with a big group, he added. And what about that photograph that went the rounds of social media and private messaging sites, of them sleeping while seated beside each other aboard an airplane, holding each other’s hands, her head almost on his chest? It was a Japan or Macau trip, he told De Castro. Gretchen and he are just very close, he said, and she treats him like a sibling. He accompanies Gretchen, because while Tonyboy and Gretchen travel at the same time, they can’t be on the same flight. “Laging hiwalay kasi isa lang anak nila,” Ang said, referring to Dominique Cojuangco. So did Gretchen steal Ang from Nicole? “Walang agawan dahil hindi naman kami ni Gretchen,” he said.

The more than 20-minute interview with Ang was taped the morning of Thursday, October 24. Ang arrived more than an hour early before he was slated to sit down with De Castro in front of the camera, in the same studio and set where Marjorie Barretto was interviewed Tuesday. He was with his daughter, a friend, and three or four bodyguards. According to studio observers, Ang was “charming and unassuming,” while some observed he seemed very close to his daughter. The atmosphere on the set was relaxed.

Before the more controversial topics, Ang talked about his roots and how he keeps fit. Ang said he is pure Chinese. His father was from China while his mother was born in Pasig. He was born in Sta. Cruz, Laguna and grew up in Mandaluyong. When De Castro pointed out Ang’s good physique, he talked about his routine. He said he lives a simple life. He is in bed by 10 PM and is awake by 5 or 6AM. He goes boxing every day except Sunday. He lifts weights every other day. He likes going to his farms.

On the second half of the interview, De Castro asked Ang how he ended up in the wake of Miguel Barretto, witnessing, along with the President of the Philippines, the latest episode in the Barretto family feuds. Ang related what happened, beginning with Gretchen receiving a call from the President’s camp at 2PM that Wednesday, asking the former actress to be at her father’s wake that evening because the President was coming. Ang said Gretchen is close to the president. “Ang sabi ni Gretchen, ang sagot niya, ‘Wag na po kasi baka magkagulo lang,’” Ang said, recalling what Gretchen told him. After 30 minutes, Gretchen got another call from the President’s office again saying “kailangan daw po kayo pumunta kasi pupunta si President.” When it was confirmed that President Duterte was indeed coming, that there was an already an advanced party, that flowers have been sent, Ang got a call from Tonyboy asking him, “Pare, pakisamahan mo si Gretchen, baka mapa-away do’n.” Tonyboy said he couldn’t come because of his lower back pain.

When Nicole Barretto got wind of the possibility of the businessman showing up in the wake with Gretchen, Nicole gave Ang’s daughter a call asking her to tell Ang not to appear at the wake out of respect for her grandfather. Ang’s reply to his daughter? “Achi, pakisabi kay Nicole, pupunta lang kami do’n para kay Presidente, sasamahan ko si Gretchen,” Ang said recalling his message, adding he and Gretchen will be leaving anyway as soon as the president leaves. The businessman said the president got to the chapel earlier by around 10 minutes. The president first reached for Inday Barretto’s hand and then Gretchen’s, bringing them together. It was an emotional reunion for the mother and daughter who have not spoken to each other in a long time. After a while, the president attempted to do the same with Marjorie and Gretchen. Gretchen was extending her hand, according to Ang, but Marjorie said, “Sorry, Mr. President.” Ang said he suddenly heard Marjorie scream.

The businessman said it was Claudine and Marjorie who got into a fight. He said it wasn’t true he was attempting to harm Marjorie; he was only trying to protect the President and Gretchen from her, asking her to respect the President. “Hindi ako nananakit ng babae.”

Towards the end of the interview, Ang said how important his own family is to him. “Mahal ko pamilya ko,” he told De Castro. “Family man ako. Hindi ko pagpapalit maski kaninong babae ang pamilya ko.” Ang has eight kids. In closing, he was asked what his advice would be to the Barretto family. He said its best to keep secrets, especially unpleasant ones, hidden from the public. “Huwag tayong mainggit sa tao kung maganda ang buhay nila. Huwag din tayong maawa sa tao. Dahil lahat tayo may ups and downs ang mga buhay natin.” He said he wishes the family would join hands and help Inday, the matriarch, survive her new life alone, and to make amends with each other. “Magkabati-bati na kayo,” he said.