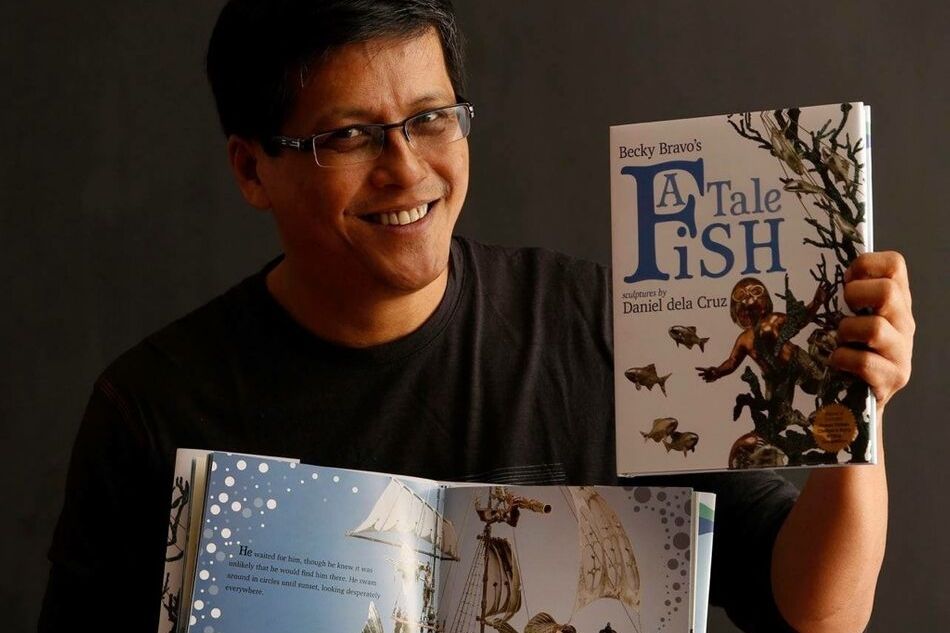 Gigo Alampay and CANVAS wants us to consider children's books as an art form that can shape our future..
Culture Spotlight

The CANVAS founder believes that we should trust children with uncomfortable truths and complex ideas. Through the initiatives of his organization, legendary artists like BenCab and Rodel Tapaya are helping the next generation be more equipped and aware.
Jam Pascual | Sep 19 2019
facebook twitter

It started with a story called “The Man Who Planted Trees.”

Written and published by Jean Giono in 1953 and adapted into an animated short film in 1987, the tale tells a lone shepherd who, with a quiet but unbreakable commitment. He manages to re-forest a completely desolate wasteland, all on his own, over the course of many years. When Gigo Alampay first saw the film in college in the late 80s, he promised himself that he would publish an adaptation in the Philippines. A small dream; a seed.

A few interesting detours and bumps met Alampay on the road to this goal: a few ventures into the art world via Red Dot, trying out buying paintings as an investment then selling only one, and a stint in teaching. He inquired about securing the rights to the story, only to find that Giono intended for the story to be absolutely, freely distributed. In June 13, 2005, he put out Elias and His Trees, written by Augie Rivera with art by Romeo Forbes. This also served as the official birthdate of Canvas, a non-profit organization that empowers the disenfranchised through art and literature. Alampay is its founder and executive director.

After being diagnosed with cancer, Forbes would pass away the following February. His name lives on in CANVAS’s Romeo Forbes Children’s Story Writing Competition, which invites writers to make literature for children, and puts them side by side with the work of the country’s best artists. The likes of Rodel Tapaya and Liv Romualdez Vinluan, whose art is normally out of this world and sometimes dark, have painted stories for children. The names of legendary painter Elmer Borlongan and award-winning Becky Bravo grace the cover of The Rocking Horse, a book about death and grief. Heavy, yes, but Alampay tells me that we can, and should, be able to trust children with uncomfortable truths.

“I think one function of art is to ventilate issues in a way that gets people to think. It’s a window to new ideas,” Alampaya says. One could say that CANVAS is such a window. A blank space where beauty can flourish, an empty field where life can begin anew. It invites us to consider an art form that adults seem to take for granted: the children’s book, and how such a thing can shape the future.

While he grew up reading Tintin and Hardy Boys paperbacks, Alampay doesn’t consider himself a heavy reader. In his education, he didn’t take up liberal arts, but economics. He studied environmental law, and in his practice showed an interest in policymaking and reaching out to communities. Much like Giogno’s shepherd, there is no dramatic, heart-wrenching backstory that motivates Alampay’s advocacy. It’s just the sensible thing to believe in.

“More than anything, books will empower children,” he says. “You say that children are the hope of the country. It’s a cliche, but it’s true.”

Alampay knows that it’s better for kids to grow up with art than without. And in the 15 years CANVAS has been around, it has pursued multiple projects in line with this truth. Their Project Banig Zamboanga, for example, provides psychosocial intervention for children affected by armed conflict. Looking For Juan, meanwhile, endorses public banner art, making the kind of beauty that is often holed up in galleries more accessible.

“We do the books kasi we want our kids to learn to love books," says the dad of three. "Because if they learn to love books, there’s a chance that they will learn to live a better life.” Some of their published works include Karapat Dapat, which compiles articles from the United Nations Convention on the Rights of the Child, written in accessible language: “Maging sino ka man, anuman ang iyong wika, kultura’t paniniwala, dapat mong tandaan: bilang bata, ikaw ay may mga angking karapatan.” Colorful illustrations and watercolor paintings bring every page in this book to life. “Like children's books, I think [fine art] opens kids' interests in the humanities. Of course, STEM is important. Science, engineering," Alampay says, "pero there's also something to be said about the humanities and the way they get people to imagine, and to think independently.” These pages must be a consolation to any child, but especially those who are displaced by armed conflict or natural disaster, or those who have undergone great abuse, or even those who fear for their lives, living in a drug war that targets even children.

It’s not like Alampay can solve the systemic problems of illiteracy and human rights abuse all on his own. Charity does not automatically mean change. But if you read The Man Who Planted Trees, the lone shepherd’s actions set nature on a course to rebuild. The more he planted trees, the more seeds were scattered by the wind, the more water ran where it did not run before.

Doggedly, Alampay chases this chain reaction of creation with future plans. Next on CANVAS’s agenda is to put up a children’s museum for Philippine art. A better future towers over this country, like a forest, if only one will open their eyes to see.