Is pottery the Filipino man’s next big hobby? 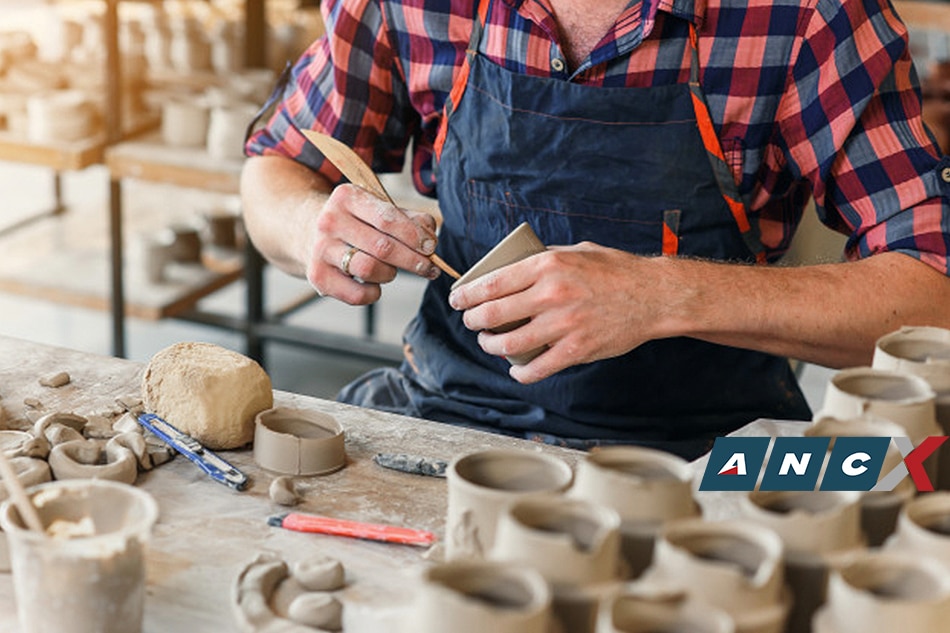 Although there are a number of male potters in the Philippines, it is more of a serious art than a passing trend. Photo from Freepik
Culture Art

Is pottery the Filipino man’s next big hobby?

Is there an actual culture of “Bro-ramics” in the Philippines? A pottery artist gives his two cents on the supposed trend. By RACHELLE MEDINA
ANCX | May 16 2020
facebook twitter

It is the second day of the tense COVID-19 lockdown in Metro Manila when I get to sit with pottery artist Joey de Castro at the Sierra Madre Gallery in Mandaluyong, which he owns. There is a police car blaring curfew announcements outside the window, but we ignore this and tour the gallery instead.

The gallery, which was launched two years ago to specialize in Philippine ceramics and pottery art, is now filled with de Castro’s own hand thrown vessels, vases, and plates—an entire collection meant for the recently postponed Art in the Park. “It’s okay, this is all just waiting for the next show,” he says optimistically, adding that he welcomes the forced respite as an opportunity to complete all his pottery commissions.

De Castro has been creating pottery since 2003, and taught the subject at the College of Fine Arts at the University of the Philippines-Diliman for about nine years, so I thought he was the best person to ask about the recent trend of male ceramicists and their brotherhood (coined “Bro-ramics”), with the likes of Brad Pitt and Leonardo di Caprio throwing manly jokes and clay on the pottery wheel. De Castro gives me a bewildered look and says that although there are a number of male potters in the Philippines, it is more of a serious art than a passing trend.

A history of pottery of men and women

De Castro delves first into our local pottery culture. “Tayo lang ang wala masyadong ceramics culture in Asia. Most of it is in Malaysia, China—literally they have thousands of years of pottery art,” he explains. “And then na-colonize kasi tayo, we started to import Chinese jars, so we really stopped at terracotta.” He goes on to say that pottery as an art form in the Philippines was only revived in the 1970s.

As for pre-colonial gender roles in pottery, De Castro surmises it was possibly a team effort between couples, with the women doing the creative process and the men fulfilling their hunting/gathering supporting roles. “Sa probinsiya, the women create the pots. The men harvest the clay, and then the women form it into vessels. Then the role of the guy is to fire it afterwards.”

Equal opportunity on the wheel

Without pigeonholing each gender, De Castro reveals he has observed some differences between men and women in pottery, which has been considered a leisurely hobby of sorts for some. In De Castro’s own studio-workshop, however, he only accepts students who are in it for the long run, not dabblers.

De Castro also notices a remarkable difference on how men and women approach their pottery work. “The guys are more persistent in conquering the clay—they take note of their speed, force, position—parang sports ito sa kanila. ‘Yung women, they focus on the form of the piece.”  There is also the subject of men who create pottery as an income source. “Napansin ko ‘yung mga ibang newbies na lalaki na sasali, they treat it as work, as a means of livelihood talaga.”

The Filipino potters you should know

Aside from the Big Three, De Castro cites the younger generation of notable pottery artists: “There’s Pablo Capati, EJ Espiritu from Silang, Cavite, Romanlito Austria who is a teacher in UP, and the youngest of them, Marco Rosario.” Here is a more detailed roundup of the men of Pinoy Pottery, and where to get their pieces.

The legacy of the Pettyjohns is not only seen in their work, but in the generations of students they have taught in their studio in Pansol, Laguna. “Tessy and I started teaching in the mid-1980s. It was a difficult decision for us, [as] there were only a handful of studio potters those days…whatever knowledge and experience we had was earned from hard work, trial, and error,” Jon relates. Jon and Tessy create their art as a team, with Tessy’s works being highly detailed and sculptural, and Jon’s pieces taking the form of modern, streamlined vessels.

The Liliw-born De Guzman studied fine arts at the University of the Philippines. Best known as a painter, his artworks were social realist paintings with broad strokes, unsettling subjects, and foreboding colors. His foray into pottery began when he was introduced to the art by Anne Polkinghorn in Mexico, and got into it further when he and Polkinghorn moved to Sagada in the 1980s. He is now based in Candelaria, Quezon.

Today I had the pleasure of spending time with Philippine national artist #jaimedeguzman in his home in Candelaria, Quezon. Jaime is a painter, potter, revolutionary, and a poet who studied under Mexican social realist painter David Alfaro Siqueiros. We connected over a deep conversation on personal and national mythologies, the history of the Philippines, the contemporary art scene, muralism, and our experience of Mexico. What fascinating soul. I gave him one of my driftwood fragments as souvenir #philippineartist #nationalartist #philippines #art #artlegend #history #gritzkadelvillar #artistportrait

Augusto “Ugu” Bigyan started out as an accountant, and then settled in Quezon full-time to become a potter. His pieces are inspired by nature (leaves, butterflies, birds, organic shapes), and often accented with wooden twigs or vines. Visiting his pottery garden and restaurant in Tiaong is an experience—guests can dine on fresh, provincial fare on his plates in bamboo pavilions tucked within a lush garden, shop his ceramic ware at the store, and stay overnight at his Hele Bed and Breakfast (reservations are required).

De Castro started out in the field of photography, and discovered pottery when he took lessons under the Pettyjohns to create pots for his growing succulent collection. What began as a hobby grew into a full-time career. De Castro is known as the “condo potter” (other potters are located mostly in the provinces) as his studio and kiln is located in the uppermost floors of a building, where he also runs a gallery dedicated to contemporary Philippine pottery.

After taking up ceramic engineering and living in the United States, EJ Espiritu found himself back in the Philippines, eventually settling in Silang, Cavite, to set up Cornerstone Pottery with his wife, Eva. The bucolic provincial setting inspired him to create delicate and elegant vessels in mustard, celadon, and bright cobalt blue, as well as earthy serving dishes and plates for many of the top restaurants in Metro Manila. He also teaches pottery in his Silang studio.

Capati’s style is whimsical, and oftentimes playful, but studied, alternating between organic sculptural forms and figurative pieces with a surprise detail (a skull, a cat, or a stem that doubles as a knob). The potter studied in Kobe, Japan, and at the University of South California and has a studio in San Jose, Batangas.

Best known as an associate professor at the University of the Philippines-College of Fine Arts, Romanlito Salvador Austria holds a master of visual communications and design at the Kyushu University, Japan. His ceramic pieces and vessels have an earthy feel, punctuated with bright colors. Austria also teaches hand-building and wheel-throwing workshops at UP for those who are interested.

One of the youngest male potters in this roundup, Rosario delved into pottery fulltime after he graduated from the University of the Philippines-College of Fine Arts. His pieces mostly have a whimsical and light-hearted feel, with multiple colors under his glazes, hand-built forms, and figurative pieces.